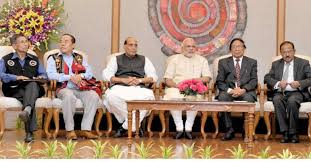 Naga Accord Causes Heartburn in the North-East

Naga Accord Causes Heartburn in the North-East

Editor-in-Chief of indiacommentary.com. Current Affairs analyst and political commentator. Writes for a number of publications. View all posts by this Author
The Naga accord signed by the government of India and NSCN (IM) is being viewed with suspicion in some states in the North-East. The Assam governor, P B Acharya, who holds additional charge of Nagaland, was constrained to explain to the media in Guwahati that Ã¢â¬Åas per my understanding, as told to me by the Prime Minister, there will be no territorial changes.Ã¢â¬Â

But this goes against the resolution passed in the Nagaland assembly on July 27 this year that said Ã¢â¬Åthe House unanimously resolved to reaffirm its resolutions on December 12, 1964, August 28, 1970, September 1994 and December 2003 on integration of all Naga contiguous areas under one administrative umbrella and urge upon the Government of India and the NSCN (K) to resume the ceasefire agreement to create a conducive atmosphere for political negotiations.Ã¢â¬Â

The territorial integration issue is what will make or break the peace accord, unless of course the government of India manages to convince the larger body of Naga people that, as PM Modi said, it is impossible to deliver a 100% agreement on all issues. Apart from the NSCN (IM), there are four other armed rebel groups active in the state, out of which NSCN (K) is most belligerent. For them, territorial integration remains one of the main demands.

With the Nagaland state assembly also having taken a similar view, the matter assumes great significance. It may seem premature to debate over this matter with the details of the current accord not in public domain, but it is sure that it may act as a spoiler. The government of India cannot even think of redrawing boundaries, as that will bring turmoil to Assam and Manipur, the two states likely to be affected by contiguous areas definition of Nagas.

There is need to tread cautiously in this regard. The involvement of all hues of Naga political thought, civil society and the Naga people is an utmost requirement. Any unilateral or bilateral agreement is not going to find support on the ground and will ensure its failure. Hence, a lot of work still remains to be done.