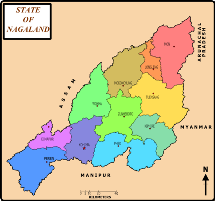 View all posts by this Author
It seems that the change of ally made no difference to the electoral fortunes of the BJP in Nagaland. Before the elections, the BJP ruled the state in alliance with the NPF. It broke that alliance to forge a fresh one with the newly-formed NDPP. The new alliance has swept the polls by attaining the majority mark. But such is the fluidity in alliances in the state, the BJP, if Kiren Rijiju is to be believed, might ally yet again with the NPF to form the next government. If that happens, there will effectively be no opposition in the state.

Nagaland had witnessed historic events before the polls when all parties supposedly signed a plea, at the behest of the hurriedly-formed Core Committee of Nagaland Tribal Hohos and Civil Organizations (CCNTHCO), for boycotting the polls to press for immediate solution to the insurgency problem in the state. Although nothing came out of it as each and every party broke off to put up candidates just before the deadline for submitting the papers, it was a significant event as it highlighted the inability of the Centre to implement the accord it had signed with the NSCN (Issac Muviah faction) in 2015.

The people of Nagaland have given another chance to the BJP to rule the state in alliance with its new partner, the NDPP. Behind this is perhaps a wish that the new alliance will be able to implement the accord and bring peace to the state. For, Nagaland has suffered a lot due to insurgency. There is little or no development and like all other north-eastern states crony capitalism and corruption is rampant. Money meant for development schemes is siphoned out and there is no visible development.

The new mandate of the people puts a lot of responsibility on the BJP. It has to walk the talk and ensure rapid development of the region. Without jobs or local avenues for higher education (youth from the north-east have to go to places like Bangalore, Pune etc. to complete their education despite the region being so scenic and a perfect location to open higher education boarding institutes), the youth will always be lured by the insurgent outfits.