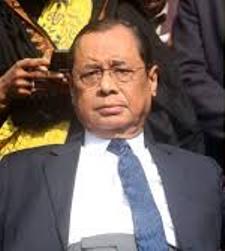 No Controversy: Justice Gogoi Is Next CJI

No Controversy: Justice Gogoi Is Next CJI

Editor-in-Chief of indiacommentary.com. Current Affairs analyst and political commentator. Writes for a number of publications. View all posts by this Author
It is good that the government has respected the independence of the judiciary and accepted the recommendation of the outgoing CJI Justice Dipka Misra for elevating the senior-most judge, Justice Ranjan Gogoi, as the next CJI from October 3. It lays to rest a controversy that was building around this appointment. Detractors had questioned the motives of the government ever since it had stalled the elevation of Justice K M Joseph to the apex court. Some people had then commented that the government was interfering in the work of the judiciary and will do the same when it comes to the appointment of the next CJI. They were of the opinion that since Justice Gogoi was outspoken and had revolted against the present CJI, the government might supersede him to appoint a judge of its choice.

Even when there is no malafide intention, a section of the press, in collusion with the so-called liberals, is trying to whip up controversy. In doing so, they are trying to drive a wedge in the relations between the executive and the judiciary. This is not good for democracy. When a group of judges had questioned the CJI on distribution of cases, they had raised a point of law. The press tried to project it as a revolt. It was subsequently cleared that it is the prerogative of the CJI to allot cases as even though he cannot be termed superior to other judges, he is obviously first among equals. Otherwise, there is no point in having a chief justice. A section of the press had played a very questionable role during that controversy. If the executive and the judiciary are two important pillars of democracy, the media is one too. Hence, it should desist from creating controversies when none exist.