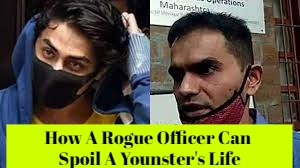 No Drug Case Against Aryan Khan

No Drug Case Against Aryan Khan

The Aryan Khan-NCB case shows that a citizen has no remedy initially if an unscrupulous officer of any investigative agency is bent on implicating him or her in any case. It has long been heard that police officers often issue threats to citizens that they will pick them up and implicate them in any case they want. It has also been seen that this has been done and is being done many times. Sometimes it is done by cops to hide their inefficiencies and sometimes for other reasons which include pleasing their political masters or some other person from whom they take money.

But why Sameer Wankhede, the controversial NCB officer, went after Aryan Khan is surprising. Maybe he was asked to do so, but by whom? The NCB has already admitted that there were gross irregularities in the way the probe was conducted initially. It was as if Wankhede was in a hurry to frame and implicate Aryan Khan. The lower courts were also at fault to believe in the narrative he created and repeatedly deny bail to Khan. There must be a system in place whereby a single officer is not allowed to proceed with a case on his whims and in a biased manner. In doing so, Wankhede has scarred Khan and destroyed the reputation of the young man who has not even started out in life and his only fault seemed to be that he was Shahrukh Khan's son.

It has been reported that Wankhede will face action for his role in conducting a 'shoddy' probe. But that will be little solace to Aryan Khan and his family who have suffered a long period filled with tension and fear because of the actions of a rogue officer. The NCB must probe if Wankhede was set up to go after Khan and if so, who directed him to do so. Just punishing Wankhede will not help and will not address the rot in the system for the probe was not only shoddy, it was biased and motivated. The entire conspiracy behind the incident must be uncovered.