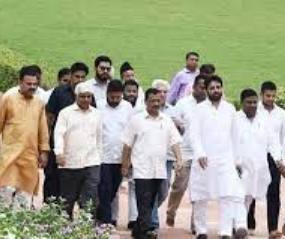 After the action taken by the Centre against AAP leader and Delhi education minister Manish Sisodia in the liquor excise policy flip-flop case, the Aam Aadmi Party today decided to hit back at the BJP. Party supremo Arvind Kejriwal accused the BJP of planning an Operation Lotus in Delhi. He alleged that the party has provided for Rs 800cr to poach 40 AAP MLAs and bring down government in Delhi. Earlier, Sisodia had also alleged that he was approached by people on behalf of the BJP who promised to have all cases against him dropped if he joined the party. Then, the BJP had countered his charge by asking him to name those who approached him but Sisodia did not name anyone.

In today's counter-attack, Arvind Kejriwal led from the front and said that the BJP was offering money to his MLAs to dump AAP and join the saffron party. He said that the BJP has built a Rs 800cr war chest for the purpose. In a dramatic move, the Delhi chief minister led his MLAs to pray at the Mahatma Gandhi memorial at Rajghat for the failure of Operation Lotus. But since 12 MLAs did not attend the prayer meeting and are said to be incommunicado for the last couple of days, the party is obviously worried about BJP's designs. However, a majority of the MLAs attended the meeting called by the party to discuss BJP's poaching attempts.

Although AAP professes to be different and has MLAs who sport a relatively cleaner image, the amount - Rs 20cr per MLA - being bandied about is enough to lure most politicians. AAP spokesmen have said that the CBI and the ED should probe where the BJP got such huge amount to poach its MLAs. With Arvind Kejriwal turning up the heat in Gujarat with his frequent visits to the state and promising 'revdis' to the people, the BJP has decided to strike in his fortress. But the game of political M&A which the BJP is playing all over India for the last few years is not good for the future of Indian democracy. The use of money power to topple governments also means that the anti-defection law needs to be amended to make it stronger.