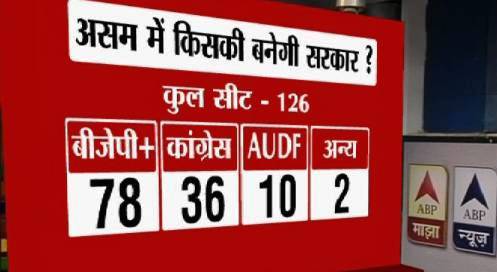 Editor-in-Chief of indiacommentary.com. Current Affairs analyst and political commentator. Writes for a number of publications. View all posts by this Author
Is Assam headed the BJP way? The ABP-Nielsen opinion poll, in a complete reversal of fortunes, predicts that BJP and its allies will get 78 seats; exactly the number Congress has in the outgoing assembly. To many, this would seem out of place with the ground reality. Although BJP did extremely well in Assam in the 2014 Lok Sabha elections, and it declared its chief ministerial candidate in Sarbananda Sonowal at an early stage so as not to repeat the mistakes of Delhi and Bihar, there are questions about its infrastructure in the state.

But all these can be put aside if there is general discontent against Tarun Gogoi and the 15 years of Congress rule. Although Assam is used to the âlahe-laheâ (slowly-slowly) culture, the people have acquired new aspirations post the ULFA phase and dynamic youngsters are now asking why the state lags behind in most things despite having had a PM (Manmohan Singh) who was an MP from the state. People have started questioning the widespread corruption and apathy in the government. This will work to the benefit of the BJP which is fast emerging as the main and viable alternative.

There is the billionaire perfume baron Badruddin Ajmal and his AIUDF to contend with. AIUDF has 18 seats in the outgoing assembly and they won 3 Lok Sabha seats in 2014. The party is expected to retain its strongholds in lower Assam and can make inroads in some pockets elsewhere. Ajmal has projected himself as the kingmaker who no party can ignore. In fact, many analysts feel that in case of a hung assembly, Congress and Ajmal can come together in a marriage of convenience to keep BJP out. But if the opinion polls come true, the BJP will be in a position to form the government with its allies and no unholy alliances will be forged.