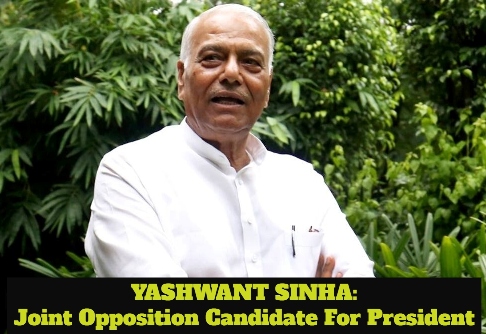 After Sharad Pawar, Farooq Abdullah and Gopal Krishna Gandhi declined to be the joint Opposition candidate for the Presidential polls and after the BJP did not reveal its cards till late on Tuesday, a fractured ( TRS, AAP, BJD & YRSCP continued to stay away) Opposition announced that it will have former BJP leader (now with the TMC) and former Finance and External Affairs minister Yashwant Sinha as its candidate for the said polls. While Pawar and Abdullah had declined the offer as they said they still wanted to make political contribution (Abdullah especially pointed out the situation in J&K after the abrogation of Article 370), Gandhi declined saying that he felt that more than opposition unity, a candidate for the Presidential polls should also generate national consensus and he felt that there were others who could do it better than him. Perhaps Gandhi thought that with the entire Opposition on on the same page, it was not proper for him to be the candidate.

In a meeting attended by Congress, NCP, TMC, CPI, CPM, Samajwadi Party, National Conference, AIMIM, RJD and AIUDF, Congress leader Jairam Ramesh read out the joint statement praising Sinha's long service to the nation and said that the Modi government failed to involve the Opposition parties to work for a consensus candidate. The statement was also hopeful that the unity forged for the Presidential elections "will be further consolidated in the months ahead".

But it is clear that with major parties like the TRS, AAP, YRSCP and the BJD not on board, the differences between the Opposition parties are out in the open. It was being speculated even a couple of months ago that K Chandrasekhar Rao, the TRS supremo was crisscrossing India and meeting all opposition leaders to forge unity for the Presidential polls. But Mamata Banerjee was also doing the same. Now if TRS is not attending the current opposition meetings, it is clear there are serious differences between the two. While AAP has not indicated what it will do (it might abstain from voting) YRSCP and BJD are both likely to vote for the NDA candidate. In such a situation, the joint Opposition candidate stands no chance and the NDA candidate will win with ease.