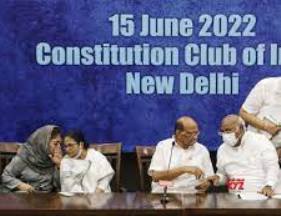 The meeting of Opposition leaders called by West Bengal chief minister Mamata Banerjee to discuss strategy for the Presidential polls and explore the possibility of putting up a strong and common candidate was only partially successful. For starters, five out of the 22 parties expected to attend did not show up. AAP, YRSCP, BJD, TRS and the Akali Dal chose to give a go by to the meeting, exposing the old fault lines in opposition unity. Then, reportedly there was anger over how the TMC tried to get a resolution against the NDA government passed in the meeting with most of the attendees reportedly miffed at not having got advance notice of the same and not getting time to discuss the resolution and its wording. They also resented the last minute inclusion of such a resolution in a meeting that was called with a single point agenda to discuss the strategy for the Presidential polls.

However, the Congress and the Left attended, along with the NCP and other major regional parties. At the outset, Mamata Banerjee reportedly proposed Sharad Pawar's name as the opposition candidate to contest the polls. But Pawar, although supported by almost all the attendees, rejected the same as he felt he had more contribution to make as a regular politician. Mamata also suggested the names of Gopal Krishna Gandhi and NC leader Farooq Abdullah. Other names were also bandied about but there was no consensus and it was decided that a common candidate will be selected after discussions with all major parties. However, those present agreed that the opposition will put up a joint candidate.

It seems that the opposition bid to give the NDA a run for its money is not going to materialize this time too as YSRCP and BJD are most likely to break rank and support the NDA candidate, like they did in 2017 when the NDA shortfall was more than this time. Their absence in the opposition meeting is a pointer to that. Of the two, YSRCP has already reportedly declared that it is going to support the NDA candidate and the BJD, although keeping its cards close to the chest for now, is also likely to do the same. In that case, the NDA candidate is likely to sail through easily as the combined votes of both these parties are more than the current expected shortfall of the NDA.