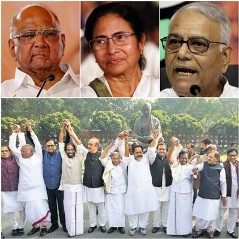 Opposition Must Get Its Act Together Fast

Opposition Must Get Its Act Together Fast

Editor-in-Chief of indiacommentary.com. Current Affairs analyst and political commentator. Writes for a number of publications. View all posts by this Author
With talks of early general elections gaining ground, there is little time left for the opposition parties to first come together and then launch a meaningful campaign against the NDA and Narendra Modi. Both sides are worried. The BJP is worried that anti-incumbency is setting in. This is evident from the fact that opinion polls are showing a downward slide in the number of seats it can win. Although Modi is by far the most popular leader on the horizon, the latest Mood of the Nation 2018 poll by ABP News-Lokniti-CSDS shows that if elections were held today, the NDA will get between 292 to 303 seats, a good 30 or more seats lesser than what it won in 2014. It also means that the BJP is unlikely to get a majority on its own. Hence, the BJP would like to go for early elections to avoid more slippage in popularity.

The opposition, the Congress in particular, would not like this to happen as the same survey has shown that both the Congress vote share and Rahul Gandhis popularity are increasing steadily. They would want the Modi government to complete its term, hoping for further erosion in its popularity. The smaller parties would in fact be wary of the rising popularity of Rahul Gandhi as most of it is happening at their cost. Hence, the overriding fear of protecting their own turf would prevent regional satraps from yielding too much ground to the Congress. The grand old party on its part would be buoyed by reports of its rising popularity and would like to strike hard bargains. That would be a stumbling block for the so-called Mahagathbandhan.

Further with the CPM already, for all practical purposes, opting out of the combined front and Lalu Yadav discredited by jail terms in fodder scam, the options before the opposition are dwindling. Of the remaining, Mamata Banerjee sees a larger pan-India role for herself which the others do not. In any case, having wiped out the CPM from Bengal and having successfully kept the BJP at bay, she is unlikely to yield any ground to the Congress in the state. In Odisha, Navin Pattanaik too would not like to humour the Congress in the face of the BJP attack on his fort. Nitish Kumar has already switched to the NDA. In UP, both Mayawati and Akhilesh Yadav are still licking their wounds and are in no position to offer a meaningful resistance to the BJP juggernaut. It is only in Rajasthan, Madhya Pradesh, Gujarat, Punjab, Maharashtra and the southern states (barring Kerala where the CPM will fight alone) that the opposition can hope to give the BJP a stiff fight.

As a prelude to opposition unity, a number of so-called morchas are being carried out. One happened in Mumbai with Sharad Pawar and the NCP taking the lead. Another is going to take place in Delhi under the leadership of disgruntled BJP senior Yashwant Sinha, who has claimed that good people from all parties will join him. But these morchas will achieve little. The opposition needs to get its act together fast. They need to sit down and chalk out strategy and a common minimum programme. For, the next election will be more a strategic battle and the opposition will have to identify seats where the BJP is weak and wrest them. Trying to hit the BJP everywhere will not result in gains. Hence, if the opposition can cobble a gathbandhan, strategic planning and precision campaigning will be two things they will need if they hope to dislodge Modi from Delhi in 2019 or 2018, if reports of early elections are true.