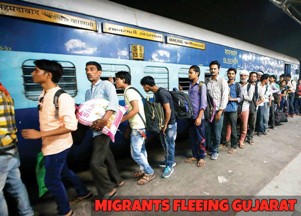 Linus tackles things head-on. He takes sides in his analysis and it fits excellently with our editorial policy. No 'maybe's' and 'allegedly' for him, only things in black and white. View all posts by this Author
Congress leader Alpesh Thakor has been championing the cause of the native Gujratis to the detriment of migrant workers. After the rape incident in Gujarat where a migrant Bihari worker was the accused, Thakor took out a procession and blamed the migrants for the deteriorating law and order situation in the state. That was the trigger for his supporters, and obviously others, to let loose a reign of terror against such migrant workers. At a conservative estimate, more than 50000 migrants have fled the state by whatever means of transport they could get.

This is very damaging for Gujarat. A vibrant economy where factories bloom and massive investment is being made in infrastructure will suffer immensely if it doesnt get workers to do the job. Gujaratis are either not capable or feel that the work being done by the migrants is below their status. That is the main reason why companies bring in labour from outside. If local labour was available for the work and at the rates the companies are willing to pay, there would not have been any need to get outside labour. But when parochial sentiments are aroused, logic falls by the wayside. The whole Bihari (and UP) community was targeted for the alleged sin of one person.

As for the charge that migrants are responsible for deteriorating law and order, there have been no such reports from the state before this incident. This often becomes a ruse for targeting migrants. The locals perhaps do not like the migrants because their way of living and culture is different. They also resent them for stealing their jobs but that is a wrong assumption for reasons explained in the foregoing paragraph. Thakor and his ilk must realize that there are lakhs of Gujratis running flourishing businesses in most cities and towns of India as well as all over the world. What will happen to them if Gujaratis in Gujarat start the "Gujarat for Gujaratis" movement?