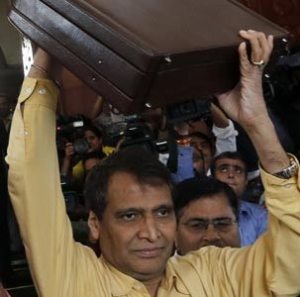 Editor-in-Chief of indiacommentary.com. Current Affairs analyst and political commentator. Writes for a number of publications. View all posts by this Author
The angry shouting by MPÃ¢â¬â ¢s that took place when Suresh Prabhu ended his budget speech told the whole story. Prabhu has presented a very sensible and forward looking budget that has eschewed populism and looks to manage rail resources in a tight and prudent manner. The MPÃ¢â¬â ¢s were angry as Pradhu had not announced any new trains Ã¢â¬" as many of them would have petitioned him to. But where is the money? The minister has set a precedent Ã¢â¬" it is the first time that no new trains have been announced in the rail budget.

The emphasis is on optimum utilization of existing resources, transparency and monetization of assets. A road map has been created for the development of the railways in the next five years and during this period the minister seeks to invest 8.5 lakh crore. This money he proposes to get from various sources, including the private sector under PPP route. He could have increased passenger fares by at least 10 % to reduce cross subsidization from freight charges. That would have given him the cushion to rationalize freight charges and bring more volumes. He has begun the process of digitizing the assets inventory, which will ensure optimum use and induct transparency.

The emphasis is also on providing facilities like more toilets, better stations, wi-fi at stations, security for women passengers, better and increased drinking water facilities and better food for passengers. Some elements of PM ModiÃ¢â¬â ¢s Swachh Bharat abhiyan come in as the minister said that a Swachh Railways will ensure a Swachh Bharat. The minister proposes to train frontline staff in soft skills so that the passengers feel welcome. He has also increased the advance ticket booking time to 120 days in order to end the tout menace.

Where the minister has missed out is in taking this opportunity to corporatize the railways. He could have broken the utility into several companies like the Konkan Railway. That would have brought in much needed funds through share sale and would have professionalized the utility. It would have also meant that it would have ceased to be a government department. Perhaps, it would also have made his post redundant.

Prabhu has said that everything cannot be done in the first year. But well begun is half done. He has begun well. Let us hope he continues to go beyond populist measures and nurses back the railways to the pink of health. It is a tough call, but Prabhu has shown steps can be taken if the will is there.