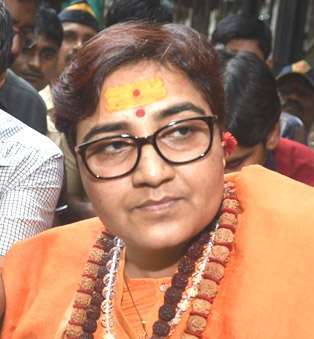 Pragya From Bhopal: BJP Is Pushing The Envelope

Pragya From Bhopal: BJP Is Pushing The Envelope

Editor-in-Chief of indiacommentary.com. Current Affairs analyst and political commentator. Writes for a number of publications. View all posts by this Author
The BJP has decided to field Pragya Takhur, accused in the Malegaon blasts case in 2008, against Digvijay Singh of the Congress from Bhopal. Although it might fit perfectly into the game plan of the party and its mentor, the RSS, of turning the battle into one between dharma and adharma (Pragya has already said she will wage a dharma yudh), it is one decision that the party might regret later and that might repulse many right-thinking people.

Digvijay Singh has been the foremost critic of saffron terror. He has strongly protested against any attempt by the RSS or fringe Hindutva outfits to commit atrocities against the minorities. Hence, it will serve the BJPs purpose to label him as adharmi and an enemy of Hinduism. Who better to take him on than Pragya, who has always stood by the Hindu religion, calls herself a sadhvi and allegedly does not think twice before instigating violence and worse against the minorities?

The BJP might say that Pragya is innocent till proven guilty. But the charges are very serious and the case has been dragging on for years, with the interest of investigating agencies seeming to have waned off after the NDA came to power in 2014. Pragya was granted bail in 2017.

If one goes strictly by legal maxims, Pragya is obviously innocent till proven guilty. But the question is, will she ever be proven guilty if this government is in power? We have the example of Aseemanand and others who were let off by the courts for want of evidence. If the political leadership wants, it can direct the agencies or the lawyers representing the government to dilute the case against an accused if he or she is politically affiliated with it.

Political or community leaders must not only be pure but must also appear to be so. But the lumpenization of politics has meant that people with charges of murder, rape, violence, arson and worse are regularly fielded by all parties and sadly, they enter our legislative chambers as lawmakers. Nowadays, the reverse is becoming true. The more you are impure, the more - and more serious - the charges against you, the better the chances of your becoming a political leader.