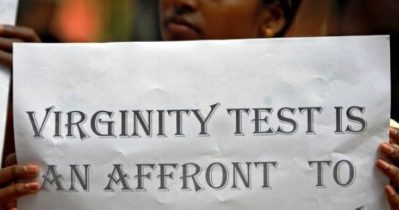 Editor-in-Chief of indiacommentary.com. Current Affairs analyst and political commentator. Writes for a number of publications. View all posts by this Author
In an act that should be strongly condemned by all right thinking people, a woman has been subjected to social boycott and made to leave a Navratri dandiya venue just because she refused to bow to her communitys jat panchayat. Aishwarya Tamaichikar married Vivek last year. As per 'custom' in their community, the jat panchayat wanted to see their bedsheet the morning after they consummated their marriage as proof of her virginity. Vivek and Aishwarya both refused to comply with the diktat. But when they started supporting a Stop the V test campaign started by another woman, they were subjected to social boycott by the panchayat from May this year.

The reprisal started soon thereafter. Aishwarya was assaulted by some panchayat members when she had gone to attend a wedding. That she was invited to the wedding was proof that other community members did not support the panchayat initiated boycott. Yet, the panchayat members assaulted her to scare other community members and ensure that their boycott was implemented. Now, she was asked to leave a dandiya show. The music was stopped and an announcement was made that it would not start if some people did not leave the venue. The music was started only after she left.

This is arm twisting of the worst kind. The panchayat is following a regressive custom that neither has any scientific basis nor social sanction. First of all, virginity cannot be proved or disproved by a few drops of blood on the bedsheet. Then, it is a very private matter between the husband and the wife and no one, including the panchayat, has the right to violate this privacy. The panchayat must know that the hymen can break before sexual intercourse due to multiple reasons and science says that its breakage is no conclusive proof that the girl has had sexual intercourse. But that is secondary. Why should the panchayat poke its nose in the private affairs of a couple? Who gives them the right to demand such an obnoxious thing as to see the bedsheet the morning after? Further, why are only women subjected to such tests to prove their purity?

It is good that Aishwarya has filed an FIR and the Pune police have booked 8 members of the community by invoking the Social Boycott (Prevention, Prohibition, and Redressal) Act, 2016. It has launched a manhunt for them. But Aishwarya had filed an FIR when she was assaulted at the wedding too. The police had arrested the culprits then too but they were released on bail. Nothing has come out of that case. Hence, this time the police and the administration must ensure that the full force of law is applied to punish the panchayat members. There is an urgent need to stop this organized parallel justice system that runs in India in order to respect the privacy of the individual and restore his/her dignity.