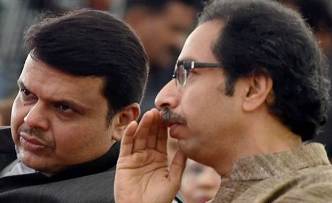 Editor-in-Chief of indiacommentary.com. Current Affairs analyst and political commentator. Writes for a number of publications. View all posts by this Author
The early trends in counting of votes in BMC elections show a hung corporation with Shiv Sena being the clear leader. Going by the trends, Shiv Sena is poised to get between 90 to 100 seats, BJP 55 to 65, MNS 5 to 10, Congress 10 to 20 and the NCP between 5 to 10 seats (The final tally stands at Sena 84 and BJP 81). Since the halfway mark is 114, no party seems to be getting a majority. Under the circumstances, the richest corporation in India will, in all likelihood, be controlled once again by the Shiv Sena as the single largest party if they spurn the alliance with the BJP. That would make for an uneasy arrangement. The trends for other civic bodies in Maharashtra are showing clear winners. BJP is leading in Pune, Nashik and Nagpur.

The Shiv Sena and the BJP have been at loggerheads since Uddhav Thackeray has been making statements unfit of an alliance partner. Since the two are ruling Maharashtra in alliance, Uddhavs remarks are very disturbing for the BJP. But maybe Uddhav is doing it on purpose as he wanted to gain an upper hand in the BMC elections.

The problems before the Shiv Sena are two-fold. It knows that if it remains in a condescending mode, the BJP as the larger national party will assert itself and reduce its importance. Hence, Uddhav thinks that he needs to remind the BJP who is the boss at the local level. Secondly, the Shiv Sena is strapped of resources. They have fought three elections since 2014  Lok Sabha, state and now local. If there are to be mid-term state elections, the Sena will be hard pressed to make its presence felt.

Hence, Uddhav knows he cannot cross a line. He will continue to needle the BJP, including PM Modi, to show his local power. But he will take pains to insert the needle only till a point it doesnt pierce the raw nerve and becomes unbearable. One can expect the alliance to traverse choppier seas in the days ahead, more so after the Senas relatively better performance in the BMC elections.

The BJP, on the other hand, has done well elsewhere in Maharashtra. It is poised to win big in Pune, Nagpur and Nashik. It will use this to counter the Senas claim of being the regional boss by saying that Mumbai does not make Maharashtra. This will also give the party the leverage to issue the threat of mid-term elections if push comes to shove. This will keep Shiv Sena in check to an extent. Overall, the results have balanced the scales and another round of tug-of-war will ensue, with the Sena thumping chest in Mumbai and the BJP counting on the rest of the state.

Latest Update: In a late burst, the BJP has moved neck to neck by winning 81 seats to Sena's 84 in its best ever performance in Mumbai. Whether Sena likes it or not, this BJP performance has reduced its importance in state politics and taken away a huge chunk of its bargaining power. Devender Fadnavis had a lot at stake in the BMC elections as he campaigned as if they were state elections. He stands vindicated as BJP has gained both seats and vote share. The Congress has been decimated, like elsewhere. These results are going to change the political scenario in Maharashtra, with BJP becoming the biggest player form now on.