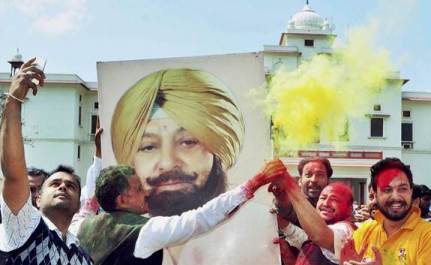 Editor-in-Chief of indiacommentary.com. Current Affairs analyst and political commentator. Writes for a number of publications. View all posts by this Author
That the Shiromani Akali Dal-BJP alliance had lost Punjab was visible to all (even the BJP), except perhaps the Badals, much before the elections. Deep inside, maybe even the Badals knew they had committed more excesses than was politically permissible. But they could not take corrective measures in time and hence had to throw in the towel without even a semblance of a fight. Since the BJP has little infrastructure in the state, being a junior partner, it could not risk breaking the alliance and go it alone. But in doing this, the shadow of the Badals infamy has fallen on the party. Although in the end the alliance got 17 seats (the predictions were for a fall to single digits) and 30.6% of vote share, it will be a long haul back for the allies.

The Congress, on the other hand, has always had a huge presence in Punjab and more importantly, good local leaders. Since Capt. Amrinder Singh was handed the campaign charge in time and there was no unnecessary meddling from the high command (read Rahul Gandhi), Singh could channelize the energy of the party workers with a focus not seen in a long time in any Congress campaign. The overbearing presence of Capt. Singh quelled any murmurs of dissent in the party. Ticket distribution was smooth and the party reaped the dividends of running a planned campaign by reaching the post with a hugely satisfying 77 seats and 38.5% vote share.

The party that really lost face, and that only because of its chest thumping and loud talking satraps, was AAP. Despite getting a creditable 20 seats and 23.8% vote share as a debutant, AAP faced ridicule as it had declared itself the party that was sure to form the next government in the state with more than a 100 seats. The difference between 100 and 20 is as wide as the difference between the bloated image Kejriwal holds of himself and the way people see him. The problem with Arvind Kejriwal is that he is trying to compete with a certain Narendra Modi when his stature is not even that of competing with Rahul Gandhi. The way Delhiites are talking, Kejriwal will be hard pressed to retain Delhi, let alone spread wings elsewhere.

Capt. Singhs hands will be full in tackling the mess the Badals have created in Punjab. The state was running on auto-pilot with little or no governance. Corruption is rampant and the drug menace omnipresent. It is only the indomitable Punjabi spirit that has not let it collapse completely. Singh is an experienced and able administrator. If he does not play favourites and appoints the best men to head the departments, he can be expected to turn the state around sooner rather than later. There is a catch though. If Rahul Gandhi and his team of advisors start meddling, even Capt. Singh will be hard pressed to govern properly.