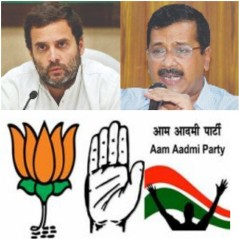 Editor-in-Chief of indiacommentary.com. Current Affairs analyst and political commentator. Writes for a number of publications. View all posts by this Author
The Times Now-VMR Survey shows that while the Congress read the situation well in Punjab, it has made a huge mistake by spurning the Aam Aadmi Party in Delhi. The party is projected to sweep all 12 Lok Sabha seats in Punjab with a vote share of 37.11%, an increase of 4.06% from 2014. The BJPs vote share is likely to fall to 30.99%, a decline of 4% and it is not projected to win any seat against the six it held. The AAP is also projected to lose hugely on vote share and seats.

But in Delhi, the picture is different. Regardless of the fact that the BJP is likely to lose almost 5% vote share (down to 41.6 from 46.4 in 2014), it is projected to retain all the 7 seats in the NCT. The Congress and the AAP are projected to jointly receive a 48.7% vote share. If they had allied, they could have easily taken all the seven seats from the BJP. Kejriwal had made several attempts to fight the polls jointly with the Congress but was spurned each time, despite intervention by Chandrababu Naidu and Mamata Banerjee.

This is a failure of leadership on part of Rahul Gandhi. Despite creating maximum noise about the need to topple the NDA to save the country, he has not shown a willingness to forge strategic alliances especially after the opposition leaders failed to choose him as the natural leader of the pack and the electoral victories of the Congress in the big states of Madhya Pradesh and Rajasthan. Several opposition leaders asked him to have an alliance with AAP in Delhi but Rahul could not bring the state unit on board.

If a megalomaniac like Arvind Kejriwal was willing to forget past bitterness and come together in the larger interests of opposition unity, as the bigger party, the Congress should have also shed its inhibition and should have forged an alliance to beat the BJP. By not doing so, Rahul Gandhi has shown that opposition unity for him is to be achieved only if the other parties are willing to kowtow to the Congress and not on the basis of ground realities. This means that the Congress will not gain anything in Delhi while the BJP will laugh all the way to the voting booths.