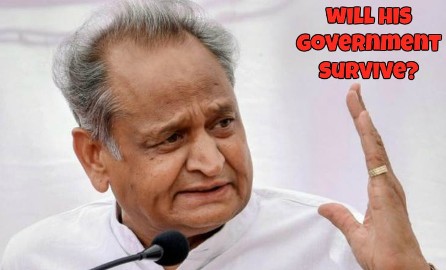 Rajasthan: Sachin Pilot Might Not Succeed In Toppling Gehlot

Rajasthan: Sachin Pilot Might Not Succeed In Toppling Gehlot

It seems the Congress is not interested in solving disputes among its state-level leaders and more importantly, is not interested in addressing the grievances of the younger breed of leaders. It can mean that either the party is strongly in the grip of the old guard (and hence the chorus of appeals to bring Rahul Gandhi back as party president) or that the party high command thinks that the younger breed is dispensable.

There can be no other explanation for the party ignoring the festering dispute between Kamal Nath and Jyotiraditya Scindia in MP about three months ago resulting in Scindia leaving the party and joining the BJP. Later, the Kamal Nath government in the state was also brought down by rebel MLAs supporting Scindia. The same story is being repeated in Rajasthan. The feud between Ashok Gehlot and Sachin Pilot was put on the backburner by the Congress high command. No attempts were made to bring the two together. The stage was set for 70's style factionalism and that is exactly what has happened.

It is reported that Sachin Pilot had brought the differences and their serious nature to the attention of senior party leader Ahmad Patel about a fortnight back. The party also knew that secret negotiations were perhaps going on between the rebels and the BJP. Yet, what happened in these 14 days? Instead of any rapprochement efforts, Pilot was sent a letter asking him to appear before the SOG in Rajasthan.

There has been a flurry of activity this morning with Pilot meeting Patel again and a meeting with Sonia Gandhi also on the cards. But Pilot is also slated to meet BJP president J P Nadda later in the day. Hence, it seems that either the divide is too deep for it to be bridged or Pilot is keeping all his options open in a fluid situation.

Taking everything into consideration, this correspondent is of the opinion that Pilot's revolt may not succeed. The numbers are still in favour of the Congress. Maybe Pilot's grievances will not be addressed as the party might want to stick with Gehlot. In that case, Pilot will leave the party and join the BJP. But the Gehlot government might survive.