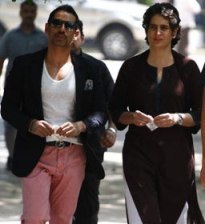 By our team of in-house writers. View all posts by this Author
People are talking about the mainstream media going to the dogs. Who is Robert Vadra, people are asking, for the media to highlight his comments about how the Centre is blundered with demonetization and is continuing to blunder after that. Is Vadra a politician, an economist or even an office-holder of any prominent trade organization? If not, how do his views matter so much that sound bites from him are solicited by eager reporters?

People are saying that they are fed up with the prominence being accorded to a discredited businessman like Robert Vadra just because he is the son-in-law of Sonia Gandhi. They are asking which other private citizen is asked for his views on matters of national importance and then those views are telecast with the same degree of prominence.

People say that Vadra should keep his views strictly to himself (or post them on a personal blog if he wants) and the media should refrain from giving him prominence. People like Vadra should not be allowed to flash their self-importance by being given access to prime time television, the people say.

People are talking about how Robert Vadra was pampered during the UPA regime and how undue favours were bestowed on him by the Haryana government resulting in him making windfall profits in land deals. People are saying that Vadra should keep a low profile and enjoy his ill-gotten wealth till the law catches up with him. Unless he acquires knowledge about state matters, he should not burden us with his considered views on such matters, people wail.

Flashy dressing (pink pants and all) and enjoying the high life must continue to be the priority of Vadra, people say. For, he is Sonia Gandhis son-in-law after all and by that token enjoys certain immunity from prosecution, despite the probe into his land deals. People somehow believe that there is an unwritten law in India that prevents politicians from punishing other politicians or their relatives for their crime. People are talking about how Robert Vadra is going to go scot-free for his involvement in shady land deals.