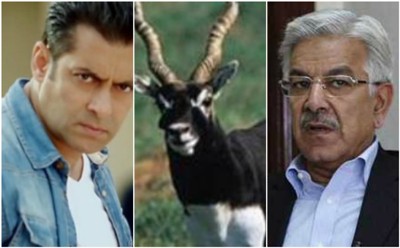 View all posts by this Author
Comments from Pakistanis  across the board from politicians, celebrities and commoners  after Salman Khan was sentenced in the black buck killing case shows that they have little understanding of how the legal system works in India and how India treats its minorities.

First off the block was the foreign minister of that country who chose the wrong issue to vent his ire on India. While commenting on the sentence given to Salman, Khwaja Asif Abbas is reported to have said that "to sentence him in a case that is twenty years old goes on to show that lives of those who are Muslims, untouchables, or Christians are not valued in India. Perhaps if he belonged to the religion of the ruling party of India, he would not have been given such a harsh sentence and the court might have been lenient with him."

His comment displays his ignorance and bias in equal measure. Firstly, cases in Indian courts do drag on for many years but that does not mean that the person committing the crime should be let off or any leniency be shown to him. Secondly, unlike Pakistan, India is a secular country where the law is same for all, rich or poor and Hindu or Muslim. Thirdly, the ruling party in India does not have any religion. Fourthly, Salman Khan was not the only Muslims among the accused persons. Saif Ali Khan and Tabu were also Muslims. But they were acquitted.

Abbas is the foreign minister of Pakistan. If for nothing else, he should have desisted from making such a crass comment on the issue to uphold the dignity of his office. For, however much the Pakistanis desire to incite the Muslims in India, they will never succeed because apart from low-level personal bias, the perceived institutionalized hatred for Muslims in India is a story cooked by the propaganda machine of Pakistan. There are enough constitutional safeguards in India for minorities and no party  not even what Abbas obliquely calls a Hindu party  can ever brush them aside to trample the minorities.

Further, Abbas should know that the judiciary in India is particularly impartial when it comes to deciding cases involving religion. If that was not the case, the land parcel in Ayodhya would have been given to Hindus long ago and a shining Ram temple would have been built there. We have our shortcomings as every other nation but no one can accuse us, especially the judiciary, of being against the minorities. Maybe they decide cases in Pakistan based on the religion of the litigants. In India we still follow the rule of law and facts to decide our cases. The trial court found Salman guilty. He was sentenced. But he got bail and suspension of the sentence to appeal to a higher court. He will follow the legal route to seek justice. No one can stop him from doing that. There will be no bias against him in any court just because he is a Muslim.