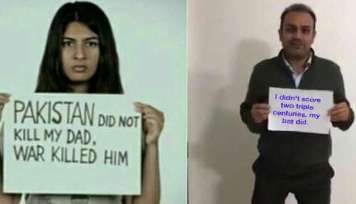 Why Sehwag is Wrong and Gurmeher is Right?

Why Sehwag is Wrong and Gurmeher is Right?

Now, people are talking about how one view, that of Gurmeher, is considered sacrosanct and pure and how, despite Sehwag being famous on twitter for his funny tweets, his tweet is taken for a troll.

If Gurmeher can say Pakistan did not kill her dad but war did, then people say that the funny man that Sehwag is, he can very easily retort with I did not score two triple centuries, my bat did. People are saying that Sehwags tweet must be taken for what it is  a funny take on a trending issue. He is famous for that, so just enjoy his tweet, laugh and stop finding a deeper meaning in it.

People are talking about how anything connected with the Left (like peace and universal brotherhood, or countries without border and Indo-Pak friendship) is immediately lapped up and any contrary view is seen as an affront. People like Javed Akhtar have said that Sehwag is an illiterate player. Since when was literacy a pre-requisite for having fun or being funny? People are saying that maybe poems can only be written by a literate person like Javed saab, but fun can be had by even an angutha chaap. Maybe Javed Akhtar needs to loosen up a bit and know Sehwags twitter pedigree to appreciate his kind of humour. But maybe his literacy comes in the way.

People are talking about how they are fed up with the jhola-dadhi-jhanda brigades  the so-called educated liberals - attempt to capture the political discourse by using students. They say that if this continues, then no one will have respect for the country and will just run after dogmatic slogans that have failed even in the country of their origin (read Russia and China). People say that these bigoted liberals should let students study and be skilled to contribute meaningfully to society. People are saying the Left should stop playing with the future of our youth in the name of freedom of speech.