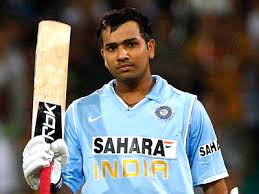 Editor-in-Chief of indiacommentary.com. Current Affairs analyst and political commentator. Writes for a number of publications. View all posts by this Author
Is Rohit Sharma the new Master Blaster? India had the original ÃÂ¢Ã¢âÂ¬Ã¢â¬Å Sachin Tendulkar, who relied on the copy book. We had another, Virendra Sehwag, who relied on hand-eye coordination and God gifted talent. Now, after his marauding 264 at the Eden against the Lankans on Thursday, one can say with some certainty that Rohit is going to follow in their footsteps and bring many laurels for the country. Looking at him bat that day, no one could have guessed that he was coming back after a long, injury-induced lay-off.

After a somewhat shaky start, Rohit was straightaway in his elements and did from the start of the innings what he is supposed to do in the end ÃÂ¢Ã¢âÂ¬Ã¢â¬Å finish off in style. In fact, India is now blessed to have two ÃÂ¢Ã¢âÂ¬Ã¢â¬Å three, if you count an ageing Dhoni ÃÂ¢Ã¢âÂ¬Ã¢â¬Å of the finest finishers of limited overs cricket in Rohit Sharma and Suresh Raina. Add Dhawan at the top of the order and Virat in the middle and you have a batting line-up that inspires awe and fear in equal measure in the minds of the opponent. With all of them clicking in turns, India is slowly getting the nucleus of its World Cup side in place.

But back to Rohit. It was an amazing display of power hitting that was clean and calculated. He was middling the ball as if God had given him a sixth sense and he was finding gaps where none existed. Slicing the field with precision, he was gathering boundaries at will. Angelo Matthews was at his wits end on deciding the field placing for him. It also helped that the Lankans were most ordinary on the field. The manner of this defeat will redouble the criticism in Sri Lanka about sending an unprepared team for this tour. Clearly, the heart of the Lankans is not in being competitive for this unscheduled trip.

The ordinariness of the Lankans does not in any way takes anything away from RohitÃÂ¢Ã¢âÂ¬Ã¢"Â¢s superlative effort. If such was the case, people would have blasted double centuries off every associate member country in the World Cup. Since that is not the case, it follows that getting a double century in such a dominant manner against any opposition is very difficult. Rahul covered himself in glory by creating a new world record (breaking the 219 run highest score held by Sehwag) and becoming the only batsman in the world to have scored two double hundreds in 50 overs matches. That he said that he was ready to bat for another 50 overs just shows how the young generation in India is hungry for success. This is what makes them world beaters. LetÃÂ¢Ã¢âÂ¬Ã¢"Â¢s raise a toast to that.