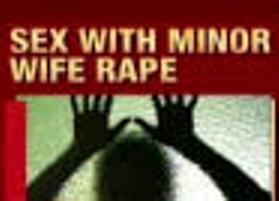 Editor-in-Chief of indiacommentary.com. Current Affairs analyst and political commentator. Writes for a number of publications. View all posts by this Author
It is a mockery of law to have the age of consent at 18 years and to allow 'husbands' to have sex with a child bride below that age. In fact, it is a failure of governance and legislature that people (I refuse to call 16 or 17 year olds children) are allowed to marry before the legal age of marriage which stands at 18 for girls and 21 for boys in India under the Prohibition of Child Marriage Act, 2006 (PCMA). The government argues that child marriage is a custom in many communities and is a reality that cannot be crushed in India. Then why keep the age of consent at 18 on moral grounds? The Supreme Court has done exceedingly well to point out to the government and the legislature that this is a situation that cannot continue and has ordered that a man having consensual sex even with his legally wedded wife below the age of consent is guilty of rape.

You will notice that I have put legally in inverted commas in the preceding sentence. This is because the legislature has all but legitimized child marriages by keeping a loophole in the Hindu Marriage Act (HMA), 1955 that says that girls below 18 but above 15 years of age can be married with the consent of their parents or guardians. Similarly, the age of boys is kept at 18 years. Hence, there is conflict in the provisions of the PCMA and the HMA. Further, the Muslim personal law allows child marriage and the MPLB is already up in arms over the Supreme Court ruling. This shows that the legislature is not seriously interested in preventing child marriages. Many communities have a self-imposed barrier where they keep the bride and the bridegroom away from each other till they reach puberty. In Bihar, for instance, the custom of the bridegroom taking away his wife from her parents' home is called "gauna," which happens some years after the child marriage. Sex between the married couple is allowed only after gauna. But this is not important as the time of gauna is decided by respective families and it can happen as soon as the girl starts having her menstrual periods (which in India can happen as early as her 11th birthday). What is important is that the HMA does not expressly ban child marriages.

The thing that needs to be done immediately is to do away with conflicting provisions in all related laws. The legislature has to first decide on the age of consent. Since more and more teenagers are experimenting with sex now, there is an urgent need to bring down the age of consent to 16. We cannot let our teenagers to be treated as criminals just because they answer to the call of their growing bodies. Instead, we should educate them about sex and its importance as a thing of joy and pleasure and to make them aware of the dangers associated with unprotected sex. Currently, society (and law) thinks any kind of sexual contact between unmarried boys and girls below 18, or with elders, is a crime. But the same is allowed even if the man is 50 years old and is married to a girl of 16 years with the consent of her parents.

Then, if the legislature chooses to keep the age of marriage as it stands now, it needs to amend the HMA and incorporate those limits in that Act. The Muslim society must be made to understand the importance of letting teenagers find their way in life before allowing them to marry. They should be asked to follow the provisions of the PCMA. All marriages of under legal age boys and girls should be prevented. Anyone having sex with anyone below the age of consent could then be punished with the crime of rape. The Supreme Court order must hasten changes in these laws if India is really interested in stopping child marriages and sexual harassment of children below the age of consent.