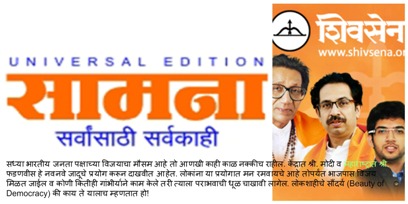 Shiv Sena: Resentment Will Not Do

Shiv Sena: Resentment Will Not Do

Editor-in-Chief of indiacommentary.com. Current Affairs analyst and political commentator. Writes for a number of publications. View all posts by this Author
What is the Shiv Sena up to? Is it so piqued by BJPs electoral gains at its expense that it now thinks that the continued electoral successes for BJP are bad for Indian polity? Would the situation have changed if the Shiv Sena had managed to keep its bastions intact in Maharashtra while the BJP had gained at the expense of the Congress and the NCP? What about the larger issue of Hindutva brotherhood? Is it consigned to flames when the Shiv Sena thinks its existence is threatened as the larger party is swallowing its loyal vote bank? Why has the BJP suddenly become a snake charmer for the Shiv Sena?

These are questions that have been troubling the minds of supporters of both the parties in the recent months. After the Latur local body polls, where the Shiv Sena drew a blank this time (it had 6 seats in the outgoing body), the party has said that it fails to understand how the people are voting for the BJP which, like the Congress, is zero in work but hero in elections. The party mouthpiece, Saamna, said that Modi and Fadnavis are acting like snake charmers and people are getting mesmerized into voting for it.

But this just seems to be a case of sour grapes. Was Balasaheb Thakarey also a snake charmer and were people also charmed into voting for the Sena when the going was good for it? Instead of introspecting why it is losing relevance in its bastions and taking corrective measures, the Shiv Sena is acting like all other opposition parties in blasting the BJP. This is not working for any of them, as the string of BJP victories all over India shows. Unlike the other parties, the Sena at least has the closeness to the BJP to align its interests with it for a win-win situation. That it has chosen a collision course only proves that the Sena is scared.

There is no Bal Thackeray to guide it. The Marathi manoos trump card has also lost its relevance and has fallen flat in recent years. In any case, the more aggressive MNS has made it its calling card (although again without much success) to steal Senas thunder. The present leadership in more interested to perpetuate dynastic rule in the party rather than look after peoples interests. Hence, when faced with a national party that speaks the same language as a regional one, the people are pumping for the former. The Sena would do well to renegotiate its alliance with the BJP. But after its recent electoral washouts, it cannot to do so from a position of strength. This is the main dilemma the Sena is facing.