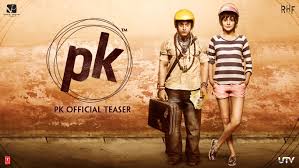 Should the Movie PK be Banned?

Should the Movie PK be Banned?

Editor-in-Chief of indiacommentary.com. Current Affairs analyst and political commentator. Writes for a number of publications. View all posts by this Author
Have you seen the movie PK? If you are Hindu, do you find anything offensive in it to the extent that you would go about calling for a ban on it? I do not think any rational Hindu would find it offensive and call for a ban. Yet, there are mobs in Ahmedabad, Bhopal and may other places in India who are trying to stall the shows by creating nuisance at theatres screening the movie. They are creating an atmosphere of fear in the minds of the general public and at the same time giving a handle to the Hindu organizations to call for a complete ban on the movie. This is an age old practice: in India, a work of art can only be banned if it is perceived to be a threat to public peace and can cause enmity between communities. So first create an atmosphere where public peace is disturbed and communities can go to war (after all, the main protagonist in the movie is played by Aamir Khan and how can a Muslim make fun of, and question, Hindu babas and rituals? It is beyond their combined IQ levels to understand that the writer/director is a Hindu and the person raising the pertinent questions in the movie is an alien coming from outer space, as if that matters.).

It is shameful that a film made with due care and with family audiences in mind, a film certified to be fit for universal viewing by the Censor Board in India and a film getting both critical and audience acclaim is being made the subject of unnecessary controversy. As I have said time and again, banning books, speeches or films, or any work of art for that matter, does not solve anything. Acharya Rajnish had rightly said ÃÂ¢Ã¢âÂ¬Ã"a dagger should not be the response to my viewsÃÂ¢Ã¢âÂ¬ÃÂ(ÃÂ¢Ã¢âÂ¬Ã"meri baton ka jawab chaku nahin hainÃÂ¢Ã¢âÂ¬ÃÂ). So also bans or disruptions should not be the response to works of art. A handful of people should not be allowed to create an atmosphere that can lead to a ban. Instead, they should be arrested and dealt with firmly. The government should send out a signal that the views of crores of its citizens who have seen and appreciated the movie would be respected and a small band of dissenters will not have their way.

If these unruly elements see the box office figures of PK, they and their nationwide cousins should realize that their efforts are counter-productive. PK is well on its way to become the highest Bollywood grosser of all times in the shortest possible time. While most of it is due to its near perfect story-telling, flawless acting and entertainment value, some of it must also be due to the antics of these mobs which must have sent viewers scrambling for seats, lest the film be banned.