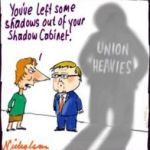 Should We Have a Shadow Cabinet in India?

Should We Have a Shadow Cabinet in India?

Editor-in-Chief of indiacommentary.com. Current Affairs analyst and political commentator. Writes for a number of publications. View all posts by this Author
The Congress party, irked by the fact that the Prime Minister has started washing domestic dirty linen in international waters, has announced that it will tail the PM on his visits abroad by sending a senior leader to counter his Ã¢â¬ÅfalseÃ¢â¬Â propaganda against the erstwhile UPA II government. The immediate trigger for this course of action was Narendra ModiÃ¢â¬â ¢s recent comment in Germany that his government would Ã¢â¬ÅcleanÃ¢â¬Â up the Ã¢â¬ÅmessÃ¢â¬Â left behind by the earlier government. This is an admirable decision by the Congress party to protect its image and counter what it perceives as Ã¢â¬ÅliesÃ¢â¬Â being spread by Modi. But once they indulge into a slanging match with the PM abroad, international waters will get dirtier than ever.

The Congress would do well to adopt a pro-active approach in domestic politics. Instead of trying to apply all its energy in countering the NDA in Parliament, where it has the numbers to thwart the government in the Rajya Sabha, the Congress should open up the battle lines on other fronts too. The easiest and most efficient way to give this government a run for its money is to have a shadow cabinet, on the lines of what exists in the UK. Instead of confining itself to comments on government policy by the party spokespersons and other senior leaders, the Congress should have a full and functioning shadow cabinet to tail all the ministers. It has the requisite firepower and the experience, since most of its senior leaders have occupied the chair in one or the other ministry.

For instance, if Rahul Gandhi was the shadow PM and he tailed Modi, he would reply to his tirades in a cohesive manner instead of the Ã¢â¬Åsuit boot ki sarkarÃ¢â¬Â remark. We need alternative policies Ã¢â¬" a statement of intent of how differently and better the Congress would have tackled a particular issue being tackled by Modi. Similarly, if Chidambaram were to tail Jaitley as the shadow finance minister, he would spell out what was wrong with the current policies and would keep Jaitley on his toes. It would definitely raise the political discourse several notches higher in the country.

But one is sure that without the inputs from the mandarins, our politicians are nothing but all gas. That is why out of government politicians never criticize a policy decision on concrete grounds Ã¢â¬" they just hide behind inanities and high sounding words. The Congress would do well to invest in a team of researchers who could advise its shadow ministers. Given the fact that it has been vanquished very badly, it has to think out of the hat to counter the BJP. Forming a shadow cabinet would be the first step in this direction.

A shadow cabinet will tell the public that the Congress will not limit its efforts for the country to the usual platitudes spelled out in the manifesto during election time. Policy making, even for the opposition, should be an ongoing task. It should inform the public where the current government is going wrong and how things could be handled better with the alternative policy it is proposing. Just stalling parliament, not allowing important bills to become law and otherwise causing discomfiture to the ruling party is not the only job of the opposition. It has been made so in India. The opposition has to involve itself in nation building as much as the ruling party. For this, it has to be pro active. Given the state of paralysis that gripped the UPA II, this is asking too much of a party that is fast becoming irrelevant.