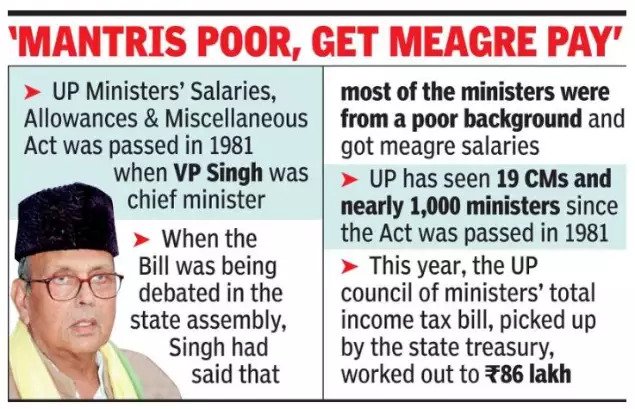 Since When Were Ministers In Any State Government "Poor"?

Since When Were Ministers In Any State Government "Poor"?

Of all things, even the income tax of the chief minister and his council of ministers in Uttar Pradesh was, till now, being paid by the state government under the 38-year UP Ministers' Salaries, Allowances and Miscellaneous Act, 1981 (UPMSAM Act). Following a report in The Times of India, Yogi Adityanath, the chief minister of UP, has directed the state finance minister, Suresh Khanna, to prepare a list of 'archaic' laws, including the UPMSAM Act, to repeal them. It is believed that the controversial provisions of the UPMSAM Act that direct the government to pay the income tax of ministers will be deleted.

The ostensible reason for including the provision in the Act was because ministers were deemed to be "poor". It was not true 38 years ago and it is not true now. Just look at any minister in any state. One can see the trappings of prosperity in their 'designer khadi' clothes, their flashy watches, shoes, shades and SUVs. Scan their election affidavits and find out about their enormous wealth running into crores of rupees, not to speak of their undisclosed and tainted wealth that is hidden from public scrutiny and held as benami.

Even 38 years ago, anyone who was made a minister would have been a politician for a good number of years to bag that position. Any serving politician for any length of time will certainly have more wealth and yearly income than any common taxpayer, either salaried or middle-class businessman, calculated over the same length of time. When the common taxpayer can pay his income tax on his own, why should the state government bear the burden for ministers?

It is all the more surprising that the said provision was enacted when the 'anti-corruption crusader', VP Singh, was the chief minister of UP. It just goes on to show that when it comes to rewarding one's own tribe, even paragons of virtue lose their perspective.

Pic courtesy: infographic from The Times of India