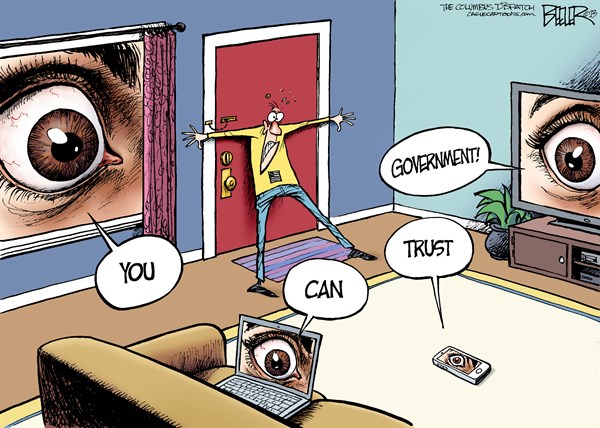 Editor-in-Chief of indiacommentary.com. Current Affairs analyst and political commentator. View all posts by this Author
Finance Minister Arun Jaitley was not much off the mark when he said that the Congress is making a mountain where even a molehill does not exist when the party said the government was converting the country into a police state after it notified agencies that could track data on computer resources. The NDA government has not made any new law for snooping that violates the privacy of citizens. Neither has it gone around any Supreme Court order with regard to the right to privacy. What it has simply done is to notify certain agencies that can, under due process of existing laws, intercept, monitor and decrypt data stored in any computer resource. What is wrong in that?

The facts are that the IT Act 2000 was enacted during the Congress-led UPA regime. Section 69 of the said act grants powers to the Central and State governments to intercept, monitor or decrypt or cause to be intercepted or monitored or decrypted any information generated, transmitted, received or stored in any computer resource. This can only be done in the interest of the sovereignty or integrity of India, defence of India, security of the State, friendly relations with foreign States or public order or for preventing incitement to the commission of any cognizable offence relating to above or for investigation of any offence. Then, in 2009, again under the Congress-led UPA, rules were framed under the IT Act 2000, called the Information Technology (Procedure and Safeguards for Interception, Monitoring and Decryption of Information) Rules, 2009 and were notified. These rules prescribed that the order to carry out surveillance under Sec. 69 would be issued by the competent authority, who in case of Central government would be the secretary in the Ministry of Home Affairs and in case of state government, the secretary in charge of the Home department. Both these draconian provisions were the brainchild of the Congress-led UPA.

Section 69 further says that the Central and the state governments may for reasons to be recorded in writing, by order, direct any agency of the appropriate Government" to intercept, monitor or decrypt or cause to be intercepted or monitored or decrypted any information generated, transmitted, received or stored in any computer resource. Obviously, the secretary in the MEA of the state Home department will not be able to carry out the task on his own. Hence the respective governments will have to notify certain agencies which could carry out the task as and when the need arises. The NDA government has done just that. The notified agencies are the Intelligence Bureau, Narcotics Control Bureau, Enforcement Directorate, Central Board of Direct Taxes, Directorate of Revenue Intelligence, CBI, National Investigation Agency, Cabinet Secretariat (Research and Analysis Wing), Directorate of Signal Intelligence (in Jammu and Kashmir, North-East and Assam only) and the Delhi Police Commissioner. But the point to be noted is that these agencies are just the facilitators, they cannot carry out any surveillance act on their own  the order has to come from the competent authority and that too for reasons recorded in writing.

The facts show that the Congress is guilty of misleading the people. The laws and the subsequent rules were enacted by its government. The NDA has only notified the agencies that can carry out the act. If the Congress is so concerned about citizens privacy and conversion of India into a police state, why did it enact such laws? If it still concerned, it should start a movement to get these provisions repealed. It can also challenge the governments notification in court if it feels that any law has been violated. It can exercise vigilance to ensure that the powers under Sec. 69 are not misused by the government. But misleading the people will not do.