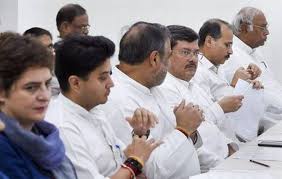 Sonia As Chief Again: The Congress Party Is Not Capable Of Out Of The Box Thinking

Sonia As Chief Again: The Congress Party Is Not Capable Of Out Of The Box Thinking

The bravado fizzled out in the end. The Congress returned to Sonia Gandhi, albeit for an interim period but we know this can extend to perpetuity in the case of the Congress, to lead it in these difficult times. Despite Rahul Gandhi clearly saying that this time there will be no Gandhi to lead the party, no one else emerged on the horizon even after the drama of creating five zonal committees, having marathon discussions and the Gandhis staying away from the committees and the deliberations.

What does this signal? First, it signals that in the young versus old fight in the party, the young leaders have lost out big time. There were talks of Jyotiraditya Scindia or Sachin Pilot taking over the reins. But nothing of that sort happened. Even Mukul Wasnik, whose name was being bandied about in the last couple of days, couldn't rally the party around him. The younger lot, Scindia in particular, perhaps lost as some of them came out in support of the NDA government's move on Article 370. The party perhaps thought that they could not be trusted with its core philosophy. One thinks that with J&K now occupying the national stage, the party could have appointed Ghulam Nabi Azad as the interim chief till something concrete emerged. It would have been a masterstroke. But the Congress is not capable of such out of the box thinking.

The second signal is that the Congress cannot let go of the coattails of the Gandhi family. If the party cannot find a non-Gandhi to lead it so much discussion and zonal representation, it never will. Reports say that the zonal committees rejected all names put forward to them only for one reason - they felt that there was no leader in the party apart from the Gandhis who had all-India acceptance. This is no secret and a feature of dynastic parties as they function on patronage rather than popularity. Parties like the Congress never allow any other leader to become prominent. That is why their state leaders can never aspire to lead the party.

The third signal is that the Congress is becoming more and more inward-looking and regressive. It is also becoming confused and losing its mojo. Even the Gandhis are losing their hold over the younger generation of leaders. It also means that Sonia Gandhiâs efforts at putting Rahul Gandhi in the thick of things has failed for now. He was always a reluctant politician and now he has washed his hands off. Like the late Rajiv Gandhi, Rahul was never comfortable with the power brokers and coteries that characterize the Congress and like his father, he was unsuccessful in breaking their vice-like grip over the party.

The Congress knows it will split, crumble and wither away if there is not the magnet of a Gandhi at the top to keep it together. That is why the party never has free and fair organizational elections. Hence, no second rung Congress leader will ever lead the party, unless he is appointed as a proxy by the Gandhis. It remains to be seen that in an era when dynastic politics is being rejected by a large number of Indians, how Sonia Gandhi will turn around the fortunes of the party in the face of a rampaging BJP and lifts the sagging morale of its grassroots workers.