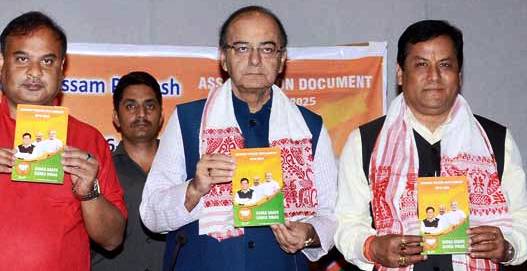 Editor-in-Chief of indiacommentary.com. Current Affairs analyst and political commentator. Writes for a number of publications. View all posts by this Author
Even as the BJP is upbeat about forming the next government in Assam, problems lurk. Allies like the AGP and BPF have already started discussing about their future course of action if the alliance does not get the necessary numbers. They are keeping their options open in case the people return a hung house. In any case, both the parties are going to demand a lot more than their worth when the government formation exercise is undertaken if the alliance wins. AGP, especially, will bargain hard for accommodation of Prafulla Kumar Mahanta in a ministry that reflects his stature as an ex-CM. That would be not less than a deputy CMâs post with a good portfolio.

In the BJP, there is Himanta Biswa Sarma, the recent recruit from the Congress. Despite several allegations, Sarma is a widely popular politician and has worked hard for his new party. His experience in governance and stature demands a good position in the cabinet. The buzz is that he will be deputy to Sonowal with home portfolio. But that might cause resentment within the party. Sarma can also be shifted to the Centre as there are talks of a union cabinet reshuffle after May 19. If Sonowal and Sarma can strike some sort of balance between their ambition and responsibilities and work in the state, both Assam and BJP can benefit.