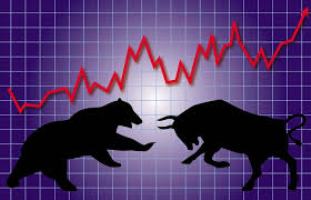 Stocks Rise And Fall As BJP Falters In Karnataka

Stocks Rise And Fall As BJP Falters In Karnataka

By our team of in-house writers. View all posts by this Author
The stock markets witnessed a steep rise and an equally steeper fall even as the political drama played out in Karnataka. The markets were sailing on calm seas in the morning as the leads showed a neck to neck fight between the BJP and the Congress. But once BJP started nosing ahead, there was a frenzy of buying which took the markets up, up and up. At one point, the Sensex was up by 455 points from its opening price of the day. The Nifty similarly rose nearly 117 points to come close to the 11000 mark.

But as soon as it became clear that the BJP was not getting past the half way mark, there was selling pressure and both the indices started tumbling. It got worse when the Congress proposed an alliance with the JD(S), even conceding the CMs post to Kumaraswamy. At the end of the day, the uncertainty was too much for the traders and the market wiped out all the gains of the day with the Sensex closing 13 points lower and the Nifty 4 points from their opening levels. One important fact remained: the Nifty could not be hammered down below the psychological level of 10800 and it meant that the bulls still felt that the BJP will form the government. Hope the Karnataka governor is listening.

Analysts say that the Nifty formed an Inverted Hammer or a Shooting Star kind of formation. For the uninitiated, it means that there was selling pressure at higher levels and it could be treated as a reversal pattern (meaning the bears are taking over) but it is not certain and needs confirmation over the next few sessions. Doesnt it sound like astrological predictions? The market is always upbeat on news of BJP victory. Hence, it has reacted adversely to the party falling short of majority in Karnataka. Traders are advised to tread with caution.