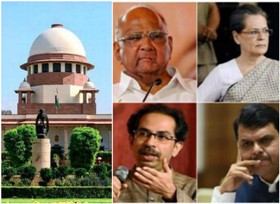 The Supreme Court has ordered a floor test in the Maharashtra assembly tomorrow by 5 pm to ascertain which alliance enjoys the majority in the house. It has also ordered voting through open ballot and live telecast of the proceedings. The court did not go into the question of the Governor's conduct neither did it accept the time given by him (the Governor had asked Fadnavis to prove his majority in seven days) for the floor test. The court had reserved its judgment yesterday after hearing both the sides where the NCP-Shiv Sena-Congress combine had raised questions about the Governor's conduct while Mukul Rohatgi, appearing for the Centre, had said that the same was beyond the purview of judicial scrutiny as per Article 361 of the Constitution.

After the court hearing, the Shiv Sena-NCP-Congress combine staged a lot of drama in the hotel where they have kept their MLAs. The legislators were lined up and asked to take a solemn oath to support the alliance. After that, the three-party alliance challenged the BJP to prove its majority in the house. Judging by the show of strength, it seems that the alliance has the numbers and will embarrass the BJP-Ajit Pawar alliance.

But there seems to be another constitutional challenge in the offing. When Ajit Pawar had submitted the letter of support to the BJP, he was the leader of the NCP legislature party in the assembly. By that token, he had issued a whip to all MLAs to be present in the assembly and vote for the BJP-NCP alliance. Subsequently, however, he was removed by the NCP and Jayanta Patil was appointed the leader of the legislative party. The NCP has submitted a letter to this effect to the Registrar of the Maharashtra assembly. Patil has issued a whip to all MLAs to support the NCP-Shiv Sena-Congress alliance. Whose whip will stand?

It will be a cracker of a day in the Maharashtra assembly tomorrow and it has been made more transparent and interesting by the Supreme Court as there will be live telecast and voting by open ballot. It is clear that if Sharad Pawar is not behind Ajit Pawar's move, Fadnavis will have to resign. The BJP and Ajit Pawar do not have the numbers. It remains to be seen whether the BJP miscalculated or whether some underhand deal has been struck that will get it the numbers. Whatever be the result, it will be a huge day for the democratic process in India.