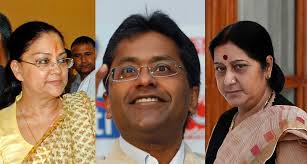 Sushma Swaraj Must Resign for Her Improper Deed

Sushma Swaraj Must Resign for Her Improper Deed

Editor-in-Chief of indiacommentary.com. Current Affairs analyst and political commentator. View all posts by this Author
On the one hand, Sushma Swaraj keeps denying that she helped Lalit Modi in getting travel documents by requesting the UK government to allow him to visit Spain for the operation of his wife while on the other she indulges in theatrics in parliament and asks what Sonia Gandhi would have done in her place. Which Sushma are we to believe?

As a senior and seasoned politician, Sushma Swaraj must be aware that whatever defence she is putting up is very weak. She says that even though Lalit Modi was a supposed offender, his wife was not at fault and it was wrong to let her suffer. But by helping Lalit Modi to visit his ailing wife, Sushma opened the door for him to subsequently travel around the world as if nothing serious had happened Ã¢â¬" as if he was not charged with a case of huge money laundering in India. He has painted the world red, partying with his ill begotten wealth.

Sushma Swaraj is guilty of helping a friend who was an accused in a case in India and who, for all practical purposes, was an absconder. If this is not misuse of official position, what is? All evidence points to the fact that Swaraj did this as an autocrat, bypassing normal ministerial channels and in double quick time. Her familyÃ¢â¬â ¢s long standing connections with Modi have also come out in the open. She has no escape routes.

Lalit Modi must be brought back to India and tried for his offences. A non-bailable arrest warrant has been issued by the Enforcement Directorate. The government must now issue a red corner notice and explore other avenues, including an extradition warrant, with the UK government, to bring him back. Only then will the country get to know the low down on this messy affair.