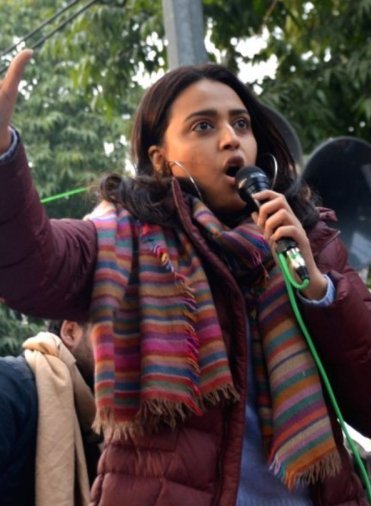 All right-thinking Indians are obviously worried and appalled that the government is bent on conducting the NPR, and maybe the NRC, after that. They are concerned that despite being bona fide citizens of the country, they have to prove their citizenship. They are confused about the papers that will be needed to prove their citizenship, with many averring that it is impossible to produce documents as old as 70 or 80 years. While this is a genuine concern on part of the people, it does not mean that we can brush the issue of illegal immigrants under the carpet.

Hence it is surprising that people who either do not know the gigantic proportions the problem of illegal immigrants has assumed or have never experienced it firsthand comment on it in an offhand manner just to show their opposition to the government. Actor Swara Bhaskar is one of them. Addressing a "Save the Constitution, Save the Country" rally in Indore, she reportedly said that "supporters of the CAA and the NRC keep harping about the so-called infiltrators having entered our country." She went on to ask "if that is the case then why are we unable to see these intruders?" She further added that "the problem is that they have intruded into the minds of the government and the ruling party". Ms. Bhaskar should know that since these aliens come from neighbouring countries, their appearance is the same as any Indian and they cannot be detected by appearance alone. But people in Assam and Bengal can detect these aliens by the manner of their speech.

Ms. Bhaskar should keep her opposition to the government to things she knows about and refrain from commenting on issues that go beyond her intelligence level. She also needs a refresher course in the history of illegal immigration in India. Sitting in Mumbai, she is perhaps unaware that the people of Assam have been fighting endlessly since the 1970s to protect their language, culture and state from these illegal aliens. The problem is acute in West Bengal too but has been kept under wraps by successive governments as they have developed these aliens into a committed vote bank by providing them with rations cards and other domicile documents. Now they can be found in every corner of the country as the NRC process in Assam had made their sponsors scatter them to prevent detection.

Every nation is entitled to first prevent illegal aliens from entering its territory and then identify, isolate and deport them. The government is not wrong in deciding to do that. But the way it is going about it is wrong. In trying to detect a few lakh aliens, it has no business putting genuine citizens of the country through fear, agony and alienation. The government has to think of some other way to tackle this problem. But that does not mean people like Swara Bhaskar will say that there are no intruders in India. By saying so, they are just showing the level of their ignorance.