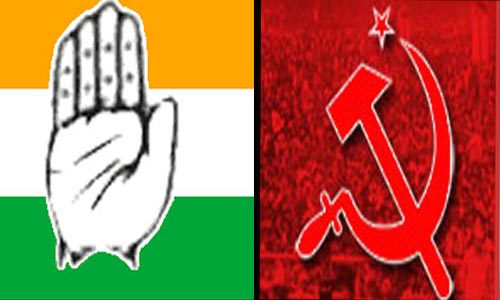 Sworn Enemies in One State, Friends in Another

Sworn Enemies in One State, Friends in Another

Editor-in-Chief of indiacommentary.com. Current Affairs analyst and political commentator. Writes for a number of publications. View all posts by this Author
No permanent allies or foes in politics
It is true that there are no permanent allies or foes in politics. The latest example was the Mahagathbandhan in Bihar last year where sworn enemies Lalu Prasad and Nitish Kumar joined hands to defeat the BJP. But the position of the Congress party is comical, to say the least. Having been routed in the 2014 general elections and having had its footprint erased from large parts of India, the party is clutching at every available straw to remain floating. But it will perhaps become the only party to have an electoral alliance with a political combine in one state and be sworn enemies with the same combine in another.

Enemies in Kerala, friends in Bengal?
Sonia Gandhi is reportedly having confabulations with her advisors about forging an alliance with the Left parties in the ensuing West Bengal elections to try and beat Mamata Banerjeeâs Trinamool Congress. The unprincipled nature of this alliance can be gauged from the fact that the two are at each othersâ throat in Kerala. The Left parties there have been baying for CM Oomen Chandyâs head for his involvement in the so-called solar scam. Chandy on his part is accusing the Left liquor lobby for going after him due to the prohibition imposed in the state. Kerala has always had two combines, one led by Left and the other by Congress, that fight for political supremacy. It was the same in West Bengal before state Congress leaders felt threatened by Mamata Banerjeeâs rising popularity and made her leave the party. Now they wish to join hands with the Left in Bengal while fighting it in Kerala.

No option for Congress
The major problem for Congress in Bengal is that despite having some pockets of loyal influence, it can never hope to garner enough numbers to be a kingmaker, let alone rule the state. Even the vote share in these pockets is dwindling with every passing election. Crumbs of office are making foot soldiers leave the party and join TMC. If Congress does not have an alliance with the Left and if votes are divided, it will fail to get seats even in those pockets. Once that happens, Congress will be wiped out in Bengal too. Hence the party is thinking of going in for this unprincipled alliance with the Left parties.