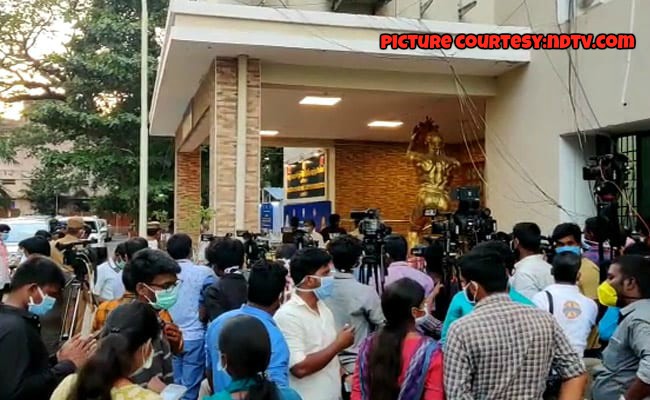 Despite the viral pictures of Prime Minister Modi holding a cabinet meeting with proper social distancing and the viral video of West Bengal chief minister Mamata Banerjee getting down from her car at a market in Kolkata and drawing circles with a brick to explain to the vendors how they should ask customers to form a line so that they stayed apart as medically advised, many Indians, especially in the political class, think social distancing is just a fad or a gimmick. No other explanation will suffice for the kind of crowd that was allowed to assemble without any precautionary measures at the briefing the Tamil Nadu chief minister EK Palaniswami held for the press today.

The chief minister was surrounded by senior health department officials and police officers with social distancing norms not being followed. Others in the crowd, including journalists and hangers-on, were seen pushing each other for a better view. All this made a mockery of the seriousness of the problem India is facing. That this was happening at the coronavirus control room of the state inside the Directorate of Medical and Rural Health Services complex in Chennai was even more shocking. One would think that those tasked with controlling the spread of Covid-19 in the state (Tamil Nadu reported 9 new cases today) would be aware of the norms to be followed in these times when a crowd was expected to gather to listen to the chief minister.

It would not have been much difficult to arrange for the briefing following proper norms. The chief minister could have addressed the gathering from a vantage position with chairs of other officials placed at a safe distance. The sitting arrangement for journalists could have been in neat rows, again after ensuring a safe distance from each other. That picture could have sent a positive message and assured the people that their representatives were following what they were preaching. Instead, the picture (lead picture of the story) that is doing the rounds might convey to the people that all talk of social distancing is just hot air if politicians are not following it. Why are bureaucrats in states not serious about the issue when they know that lapses can have serious ramifications?

Chief Minister Palaniswami needs to apologize to the people and ensure that such a thing does not happen again.