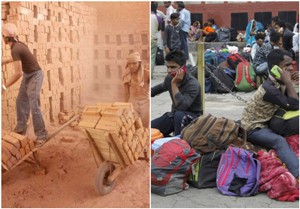 The terrorists in J&K have identified their targets keeping in mind the restrictions and the anger of the people. They are abducting and killing migrant workers, truckers from other states and apple traders who are visiting the state to buy the local produce. The idea is to scare outsiders from coming to the state to prevent either development work or to let the local produce rot and let the people suffer so that their anger at the government gets out of hand.

Since October 14, in a series of attacks, terrorists have killed four truckers, one apple trader and one labourer. But on Tuesday, October 28, in Kathrasoo village of Kulgam district, they abducted six migrant workers from West Bengal, lined them up and shot them. Five died on the spot and one was left for dead but he survived to tell the tale. All those killed were Muslim. The Valley was already facing a dearth of workers since migrant workers had not come this year in their usual numbers due to the disturbed conditions. Now, with this attack, those who have braved the conditions have started fleeing.

It is clear from these attacks that the terrorists now want to terrorize a particular class of people - outsiders who either come to Kashmir in search of jobs or to do business. They want to create an atmosphere of fear to stop these people from coming to the state in order to stop development and trade. Once the locals see that everything has stopped, and with no money coming in due to such a stoppage, their anger against the government will multiply and they will rise in revolt. This is what the terrorists are planning. Migrant workers have already started fleeing the state.

The government must take steps to stop this. It is not possible to provide security cover to all migrant workers, truckers or traders from outside but it is possible to scale up the information network and vigil against those who are killing them. For, if people from outside the state stop going to Kashmir for work, it will be disastrous. The best way to bring normalcy to the state is to ensure that Kashmiris sell their farm and handicraft produce to traders from the rest of India and migrant workers go there in large numbers to take up development work. If this is stopped, the terrorists will win.