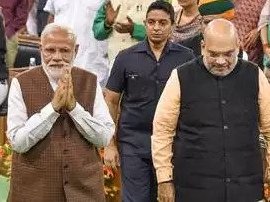 The Buzz About The Composition Of The New Cabinet

The Buzz About The Composition Of The New Cabinet

Editor-in-Chief of indiacommentary.com. Current Affairs analyst and political commentator. Writes for a number of publications. View all posts by this Author
The buzz about the composition of Prime Minister Modis new cabinet is centered on four main things  will Amit Shah get a berth, will Arun Jaitley be included, will Sushma Swaraj be retained and how will Smriti Irani be rewarded for her giant-killing act of beating Rahul Gandhi in Amethi. Also in focus are newly elected MPs from Telangana, West Bengal and Odisha, states where the BJP has done better than expected and where its influence is expanding. The party is expected to reward them for good performance. With the party doing well in minority pockets, it would also like to increase the representation of Muslims and Christians in the cabinet. It will also prove that Modis sabka vishwas slogan is not just for grabbing headlines. Prime Minister Modi and party president Amit Shah have already had a marathon meeting lasting five hours yesterday to thrash out the issue.

Let us take the case of Arun Jaitley first. He is suffering from health issues for a long time now. He had handed over charge to Piyush Goyal twice as he was hospitalized. Now, he has written a letter to Modi not to consider him for a cabinet berth, for now, to allow him to recover and be ready for challenges in the future. That Modi went to his house to ask him to reconsider shows how much Jaitley means to him. Arun Jaitley was Modis chief troubleshooter for the last five years. On most issues, it was Jaitley who issued clarifications and rejoinders to attacks by the Opposition. But it is also true that the man is suffering and if he says he should be given time to recover properly, one thinks Modi will respect his decision and will not consider him for now. Detractors can point out that this is all drama as Amit Shah is likely to get the finance portfolio and rather than show Jaitley as getting demoted the party has asked him to withdraw on his own. But one feels that Jaitley is too important for Modi to have been asked to do this. It is actually the health issues that are making him opt out for now.

Amit Shahs case is trickier. As party president, Shah has worked wonders, both in places where the party was already strong and in places where there was little or no infrastructure. He has transformed the party into a cash-rich, fighting-fit, committed cadre-driven unit that will not lose any election for the want of trying, the way the Congress lost the recent general elections. Shahs work with the party can serve as a manual of how to make a party number one almost all over the country despite several roadblocks like minority vote banks, caste calculations and regional and linguistic barriers. There is no one of matching stature in the BJP who can fill his shoes. A lightweight at the helm at this juncture will perhaps be risky. Hence, the party is in a dilemma. Moving Shah to the cabinet  perhaps in the finance portfolio  will be a just reward for his work as party president. But Shahs work in the party has not finished yet. It will be interesting to see what the party does and we have to wait for the list to be out to know that.

As for the new MPs elected from West Bengal, Telengana and Odisha, one feels that three from West Bengal, in addition to Babul Supriyo who was a minister in the last government, one from Telengana and two from Odisha are likely to make it to the cabinet. The cabinet will also include ministers from the allies and the lone AIADMK MP is most likely to get a berth in addition to two from the Shiv Sena, two from JD(U) and one each from SAD, LJP and Apna Dal. Smriti Irani will be promoted to a 'bigger' portfolio and most other senior ministers are likely to retain their places, maybe with a reshuffling of their portfolios or maybe not, to maintain continuity.