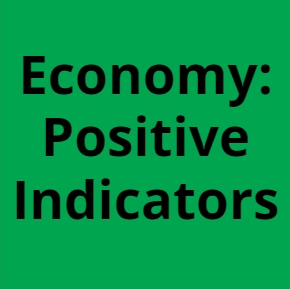 The Economy Is On Track For 7% Growth

The Economy Is On Track For 7% Growth

The news on the economic front is reassuring and suggests that growth will be on track at around 7%. GST collections in October were Rs 1,51,718 lakh crore, the second highest ever, although growth in collection, at 16.8% Y-O-Y, has slowed down due to normalizing base. But with robust e-way bill generation due to the festive season in October, collections are expected to be high in November too.

The manufacturing sector also showed healthy uptick in activity. The Purchase Manager's Index, which stood at 55.1 in September, jumped to 55.3 in October as new orders filled the books. Job creation was also at its fastest pace in nearly three years. These are good signs as growth in manufacturing and agriculture related activities, along with construction and services can reduce unemployment rapidly.

Other indicators were also positive. Railway freight earning rose 17% and passenger bookings were also healthy. Fuel sales recorded the sharpest volume growth at 12% since June, mainly due to the festive season. Car sales were also robust but two-wheeler sales were subdued. UPI payments rose by 7.7% in October. The stock exchanges also reflected this with the Sensex reclaiming 61000 after 10 months on November 1.

But September and October, being festive months, always see a sharp rise in demand for goods and services. Yet, the Y-O-Y growth is promising. Economic activity is picking up fast and with 5 months still left in this financial year, most targets, including the fiscal deficit target, are likely to be met. Government finances are healthy despite a huge shortfall in divestment due to rising direct tax collections. But food and subsidizer subsidies are taking an increasing toll. However, if crude prices remain stable, if exports do not suffer due to feared recession in developed countries and if the Ukraine conflict does not escalate further throwing supply chains out of gear once more, India can hope to achieve excellent GDP growth this financial year.oooooHoweveroweverpoowever, oweveH