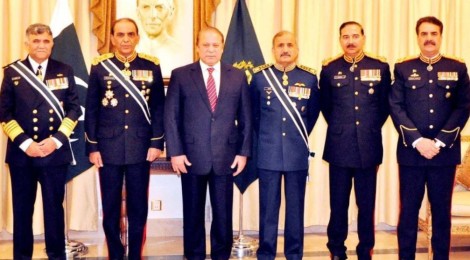 The Generals Have it Their Way in Pakistan

The Generals Have it Their Way in Pakistan

Editor-in-Chief of indiacommentary.com. Current Affairs analyst and political commentator. Writes for a number of publications. View all posts by this Author
In my last article on this subject, I had written that the NSA level talks are not likely to take place. Saying that pre-conditions set by India cannot be met, Pakistan has called off the talks. One is at pain to understand what pre-conditions India set. Given below is the full text of the joint statement issued by India and Pakistan at Ufa:

The Prime Ministers of Pakistan and India met today on the sidelines of the SCO Summit in Ufa. The meeting was held in a cordial atmosphere. The two leaders exchanged views on issues of bilateral and regional interest.

They agreed that India and Pakistan have a collective responsibility to ensure peace and promote development. To do so, they are prepared to discuss all outstanding issues.

Both leaders condemned terrorism in all its forms and agreed to cooperate with each other to eliminate this menace from South Asia.

They also agreed on the following steps to be taken by the two sides:

1. A meeting in New Delhi between the two NSAs to discuss all issues connected to terrorism.

2. Early meetings of DG BSF and DG Pakistan Rangers followed by that of DGMOs.

3. Decision for release of fishermen in each otherÃ¢â¬â ¢s custody, along with their boats, within a period of 15 days.

5. Both sides agreed to discuss ways and means to expedite the Mumbai case trial, including additional information like providing voice samples.

Even after repeated readings of the above, I have not understood what Pakistan is saying. India has said that no deviation from the Ufa statement will be tolerated. Pakistan insists that it will talk about Kashmir. Who is setting the pre-conditions? The very first step agreed to was a meeting of the NSAÃ¢â¬â ¢s to discuss Ã¢â¬Åall issues connected to terrorism.Ã¢â¬Â Pakistan wants to meet Kashmiri separatists before talking to India. If you talk to people who want an independent Kashmir at any cost, including armed conflict that involves terrorism, then how can you talk about eliminating terrorism from South Asia?

As I have said earlier, the Pakistani military establishment is dictating terms to the civilian government. Nawaz Sharif must have suffered the ignominy of getting a dressing down from the generals for agreeing to talk with India on terrorism after returning from Ufa. They told him to sabotage the talks at any cost. The result is for all to see.

PakistanÃ¢â¬â ¢s military establishment does not want talks with India. They are against aman. The civilian government is meek and afraid that the generals will take over. Hence, it listens to them. As long as the two countries cannot see eye to eye, the defence budget keeps ballooning every year, adding to the power of the generals. They want the status quo to continue ad infinitum.

There can be no fruitful talks between the two countries as long as the generals continue to rule Pakistan by proxy.