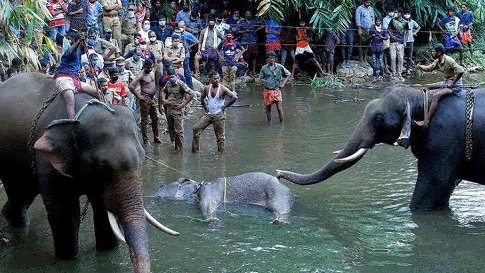 The Killing Of The Elephant In Kerala: Inhuman, Barbaric But Not Communal

The Killing Of The Elephant In Kerala: Inhuman, Barbaric But Not Communal

Humans live in perpetual conflict with animals, although they tame them and use them to perform arduous tasks. It is not uncommon to find fruits or meat laced with poison or explosives kept at points from where animals are most likely to enter a village or farmland. Farmers do it to prevent damage to their crops and others also do it to hunt the animals, but in the process, they cause horrifying deaths. It is also an illegal, and barbaric, practice punishable under the wildlife laws in India. The latest such death occurred in Kerala when miscreants kept a pineapple filled with explosives in the Palakkad district of the state and it blew up the face of a 15-year-old pregnant elephant when it strayed to farmland on the edge of a forest. The tusker died a horribly painful death when forest officers tried to rescue it but failed.

That this happened in the progressive and literate state of Kerala is surprising. The surprise is greater when one reads the great things the Kerala tourism website has to say about elephants. "Impressive elephant pageantry is an important part of the famous festivals of Kerala. Pachyderms are considered auspicious in the State. Elephants have an important role in the cultural life of Kerala. There is hardly any place in the world where elephants are loved, revered and groomed like Kerala. Several temples in Kerala groom one or more elephants for ritualistic purposes. In olden times a 'pet elephant' was quite common in aristocratic families. Since elephants are inevitable for the festivals of Kerala, tamed ones are reared at several temples. In major temples pachyderms are also needed for some daily rituals." If all this is true, then why do farmers try to unintentionally kill elephants? Obviously, the lack of education about alternate methods to prevent them from damaging crops must be one of the main reasons.

But the way the incident is being highlighted in a communal way is deplorable. Since the incident happened in the Muslim-majority area of Mallapuram, mischief-mongers have tried to portray it as Muslims trying to kill an animal that is revered and deified by Hindus. This, obviously, is wrong. Farmers as a class cannot be divided by religion. Their main concern is to prevent animals from damaging their crop and farmers of all religions think alike in this matter. Hence, to say that Muslim farmers intentionally killed the pachyderm is to attribute a devious motive where there was none. Inhuman and barbaric though the act was, there was nothing communal about it and the matter should not be used to create mistrust and enmity between communities.