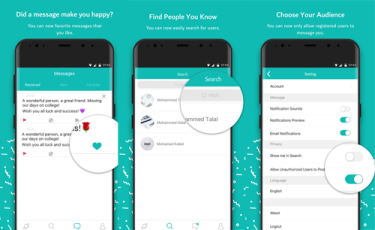 By our team of in-house writers. View all posts by this Author
A new anonymous messaging app is the rage of social media. The Sarahah app is not something new; there have been others before it that worked on similar premise, notably Yik Yak, Secret and Whisper, among others. But Sarahah is the current craze. The local language version is a big hit in Egypt and Saudi Arabia, countries where anonymous comments are a safety measure.

What does the app allow you to do? It basically allows you to create a profile on the app after which all those who you add on the app  friends, relatives, co-workers and others  can anonymously give you feedback about yourself and your work. Even members of the general public who come across your profile and may know something about you can leave their anonymous comments in your account.

The creators (the English version was designed by ZainAlabdin Tawfiq) of the app say that they have designed it so that people can get honest and unbiased opinions, which they say is not possible when the identity of the person making the comment is visible. People often avoid making unpleasant comments when they know that the recipient will know who is making them. But hiding behind the veil of anonymity, people can be honest.

Is this not a double-edged sword? As we have seen on social media, faceless and anonymous people take perverse pleasure in trolling celebrities or so-called celebrities. There is no limit to the level of indecency and abuse people can descend to when they know their identity will not be disclosed. Hence, while Sarahah can give you honest opinions, it can also give you choicest abuse from people who you may not know at all.