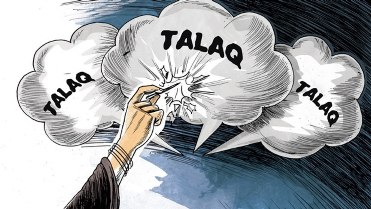 Editor-in-Chief of indiacommentary.com. Current Affairs analyst and political commentator. Writes for a number of publications. View all posts by this Author
image courtesy: the quint

The Allahabad High court has rightly termed triple talaq as cruel. The bogey of shariat that the All India Muslim Personal Law Board (AIMPLB) raises to support this talaq is also not permissible as the Quran does not permit its casual use. The court rightly said that no personal law board is above the constitution of the country. Womens rights and gender equality as guaranteed in the Indian constitution cannot be allowed to be trampled upon by taking the shield of religion in a case where the origin and maintainability of triple talaq is in doubt.

In any case, selective use of shariat should not be permitted. When Muslims can submit to uniform criminal code in India just because it is more humane than the punishments prescribed in the shariat, why do they object when dubious interpretations of the same code are sought to be eliminated? Triple talaq by phone, text and Skype are not permitted by shariat and yet qazis and maulavis regularly put the stamp of authority on such divorces. Triple and instantaneous talaq is repugnant to the spirit of Islam. Women have no say in the matter and these one-sided divorces play havoc with their lives.

The AIMPLB, in its recent conclave at Kolkata, condescended to form a womens wing to look into such matters. But given the patriarchal nature of the body and the predominance of male members, not much can be expected from it. Although the Quran permits talaq-e-tafwid, where a wife can initiate divorce and most Muslim countries permit it, we never hear of it in India. This gives support to the view that Muslim clergy is not really interested in womens rights. Further, the AIMPLB, or any of its off-shoots, cannot be allowed to take a stand that goes against the constitution. The Supreme Court is hearing several petitions challenging triple talaq. One hopes that the matter will be ended once and for all with the apex court banning such a cruel practice.