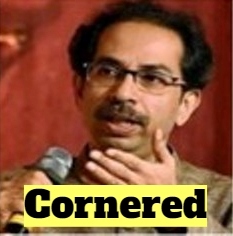 With the picture becoming somewhat clear in the ongoing internal strife in the Shiv Sena, it now seems that both camps are bracing for a legal fight that is certain to happen as both sides indulge in machinations of all kinds. The Eknath Shinde group which has revolted against the party leadership is now holed up in a hotel in BJP-ruled Assam and is quite evidently holding the upper hand as it has more than 40 MLAs (including 7 independents) with it. On the contrary, the Uddhav Thackeray group does not seem to have more than 20 MLAs in its camp at present.

But against this, the Uddhav Thackeray group is in control of the offices of power - Thackeray is still the chief minister, Narhari Sitaram Zirwal is still the acting deputy Speaker and since the rebel group is working from outside Mumbai, the Thackeray group has control of all the offices of the Shiv Sena across the state and by that token, has hold over district chiefs and the Sainiks. That is the reason why Sanjay Raut could issue a veiled and obnoxious threat to the rebels when he asked how they will move around Maharashtra when they come back. The group has already started to play its cards by asking the deputy Speaker to disqualify 15 or more MLAs. The Shinde group is also dictating to the deputy Speaker from Guwahati while claiming that since it has the majority, the legislative officer has to listen to them.

But since Zirwal's loyalties are with Thackeray, any decision that he takes will be legally challenged by the Shinde group. This will see hot legal battles, in Bombay High Court and the Supreme Court much like what happened when Operation Lotus was carried out in Karnataka. An early solution to the current political battle is unlikely and the legal tug of war can go on for weeks. There is little chance that the state Governor can play a partisan role as bound by the Bommai judgment, he will have to ask whoever claims majority to prove the same on the floor of the house. Although Sanjay Raut is upbeat that once the MLAs return to Mumbai, most of them will vote for Thackeray and the MVA, that seems unlikely now as it is certain that the Shiv Sena will split vertically. It remains to be seen how many MLAs continue to side with Shinde and how many return to the parent party once they land in Mumbai.

The BJP, by all accounts the instigator of the Sena revolt (as Devendra Fadnavis had been cultivating Eknath Shinde for a long time now), is quietly watching the unfolding drama. It will, of course, strike at the right time but for now it is letting the Sena reel play to the full. The party knows that there will be many legal battles and it does not want to give the impression that it is directly supporting the rebels. But the cat was out of the bag once the rebels asked Thackeray to leave the MVA and ally with BJP once again. That is what the rebels are going to do once the dust settles provided by that time they have enough MLAs remaining with them. For, turncoats are known to change sides at the drop of a hat - if some in the rebel ranks find that scales tipping in favour of the MVA, they will be the first to jump ship. But as of now, it does seem that Uddhav Thackeray has been cornered and the MVA will not be able to stay in power for long.