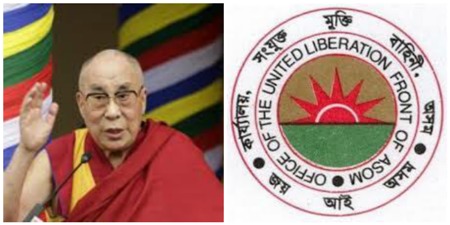 Editor-in-Chief of indiacommentary.com. Current Affairs analyst and political commentator. Writes for a number of publications. View all posts by this Author
It is regrettable that those who profess to be well wishers of a state of the Indian union think that enemies of the country are their friends. They do not have any idea that the sweet talking that an enemy does with them is for the larger cause of balkanization of India; or knowing it fully well, they in fact want India to be balkanized. Ulfa (I), helmed by Paresh Barua, has issued a warning to the Dalai Lama to refrain from criticizing China in public or private during his forthcoming visit to Assam.

Ulfa claims that Assam and China have deep cultural and linguistic affinity and the Chinese are very friendly towards Assam. Hence, it does not want the Dalai Lama to do anything to exacerbate the situation. The statement was issued by the chairman of the outfit, Abhizeet Burman.

Having taken the route of waging a covert war against India to address their alleged grievances, nothing less could be expected from Ulfa. The organization was responsible for stopping all development in Assam three decades ago, post the Assam accord. It claimed the accord was a sell-out to India. It radicalized the youth and indulged in guerilla warfare against the security forces. Its harassment of the business community in the state  through demands for huge sums of money as donations is well documented and resulted in massive flight of capital from the state  was largely responsible for the state getting behind in infrastructure.

Now that things are returning to normal, the largely ineffective Ulfa is trying to create an impression that it still has a presence. With Anup Chetia already arrested and facing court cases in India, Paresh Barua remains the only important Ulfa leader who is still on the run. His whereabouts remain shrouded in mystery. He can be anywhere from Bangladesh, Bhutan, China to Myanmar. But Ulfas latest statement gives inkling that Barua is enjoying Chinese hospitality. India should talk to the Chinese to get him arrested. Ulfa has zero support in Assam today and Barua needs to be brought to the country to face trial for his anti-national activities.