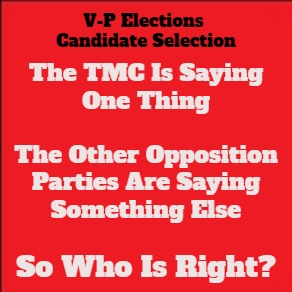 V-P Election: The TMC And The Other Parties Are Giving Totally Opposite Versions Of What Went Wrong

V-P Election: The TMC And The Other Parties Are Giving Totally Opposite Versions Of What Went Wrong

The TMC says it was not consulted before the joint opposition candidate Margaret Alva's name was announced for the vice-presidential election. Several Congress leaders have said that Mamata Banerjee had assured Sonia Gandhi that since she did not have any name in mind, she will go with whoever the other parties jointly nominated.

The TMC says that the party was informed just 20 minutes before the press conference in which Alva's name was announced. Several opposition leaders have said that Sharad Pawar tried to contact Banerjee when the meeting to discuss the name for the vice-presidential candidate was in progress but was informed that she was busy in a meeting. They said that they waited for half an hour before taking the decision as Banerjee could not be contacted.

It is also being alleged that Mamata Banerjee had met Jagdeep Dhankhar (who was governor of Bengal then) in Darjeeling just a day before his name was announced as the NDA nominee. It is also being alleged that BJP leader and Assam chief minister Himanta Biswa Sarma was also present. Congress leader Adhir Ranjan Choudhary has accused the TMC of having a pact with Dhankhar.

So who is right and why did this situation arise?

It is obvious that if Mamata Banerjee had assured Sonia Gandhi that she would support any name that the opposition jointly decides, she should have supported Alva. Also, if the TMC wanted to have a say, the party should have sent someone to attend the meeting. Further, the party has not denied that the opposition leaders had tried to contact Banerjee when the meeting was in progress. It is difficult to decide the sequence of events and judge who is right.

But whatever happened should not have happened. This sends out wrong signals about opposition unity and allows the BJP to paint the opposition parties as organizations that do not have national interest at heart but just want to protect their home turf. There must be greater coordination among the opposition parties because the common 'enemy' they are fighting against is a monolith that is not going to be displaced by weak jabs. It will need persistent and solid upper cuts which the opposition, given its present state, is looking increasingly incapable of delivering.