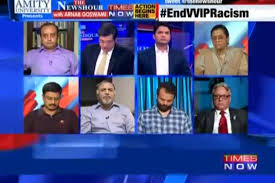 VIP Racism: Flourishing at All Levels

VIP Racism: Flourishing at All Levels

Editor-in-Chief of indiacommentary.com. Current Affairs analyst and political commentator. Writes for a number of publications. View all posts by this Author
Television channels are debating non-stop on the supposed racism being practiced by VVIPÃ¢â¬â ¢s and VIPÃ¢â¬â ¢s against the common man. Close on the heels of flight delays and offloading of passengers involving MOS for Home Kiren Rijju and Maharashtra CM Devendra Fadnavis, comes the news of DMK heir apparent M K Stalin slapping a fellow passenger aboard the Chennai Metro. Clips of the slap are being shown repeatedly on most channels. Are VVIPÃ¢â¬â ¢s and VIPÃ¢â¬â ¢s of all hue so drunk on power that they think nothing of the common man? India is witnessing a clear divide between them and us, and this divide is growing by the day.

Abuse of position of authority can take many forms, like Robert Vadra being exempt from security checks at airports during UPA tenure or when a minister in the TMC government in West Bengal was caught on camera getting his shoelaces tied by his security detail or the one where the son of DIG of J & K Police flaunted his father and himself enjoying Ã¢â¬ËperksÃ¢â¬â ¢ of power by getting shoelaces tied by subordinates or having armed guards as caddies on the golf course. At a lower level, it can be a policeman on motorcycle going the wrong way on a one-way street without any pressing urgency.

Not only do the VVIPÃ¢â¬â ¢s treat the common people like dirt but they refuse to accept their mistakes when confronted with evidence. In the M K Stalin case, the DMK first tried to pass it off as an internal matter by saying that the person slapped was a party member. Now, it has put pressure on the youth so he is saying that Stalin did not slap him.

In RijjuÃ¢â¬â ¢s case, the minister first said that he was not aware that people were off-loaded to accommodate him of the flight. Then, he posted a picture of a boarding pass in trying to prove that the flight was preponed. Now he has contradicted the IAF report and says that he will not accept it. He has also refused to apologize for his highhandedness. Similarly, Fadnavis is said to be putting pressure on the duty manager to retract his statement. All of the above are clear cases of Ã¢â¬Åchori and seena jori.Ã¢â¬Â

VIPÃ¢â¬â ¢s, celebrities and assorted queue-jumpers of all kinds (people like you and me who push a Rs 500 note to the security person or who claim that Ã¢â¬ÅHum jahan khade hote hain, line wahin se shuru hoti haiÃ¢â¬Â a la Amitabh Bachchan) should be made to understand that the days of such dadagiri are all but over. They can abuse power only at the risk of being exposed and brought to ridicule in this age when the common man is highly aware of his rights, the television cameras are mostly there and above all, the citizen journalists, who spring to action with their mobile phone cameras and the power of the social media.