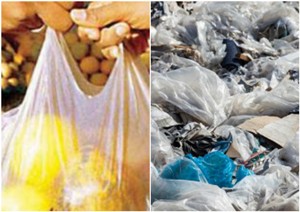 The West Bengal government has moved fast on banning single-use plastic from October 2. There were reports in the media about the Centre planning to do so on Mahatma Gandhi's birthday. The Prime Minister also spoke about it at the climate forum in New York. But there has been no formal notification regarding the same until now.

But the Mamata Banerjee government has stolen a march over the Centre. It has banned the sale and use of single-use plastic items from October 2. The authorities have informed all sellers of food and other items and stockists of such single-use plastic items to exhaust their stocks until October 1. It has imposed a fine of Rs 500 on any vendor found to dispense his wares in plastic bags below 50 microns.

The Trinamool Congress has activated its cadre to move around markets and impress upon vendors and stockists that unlike previous attempts, this time the government means serious business and the ban will be enforced strictly. This has resulted in vendors looking around for alternative packaging material like newspapers and leaves. Some vendors have also been telling regular customers to get their own bags from now.

Many areas in Kolkata are prone to waterlogging. According to the Kolkata Municipal Corporation, the major culprit is the discarded thin plastic bag. Such bags choke gully pits. They even cause mudslides in the mountains.

If the authorities can manage to enforce the ban strictly and ensure that the wholesale markets in Kolkata at Canning Street and Raja Katra do not get supplies from manufacturers, then it will be a big feather in their cap. But as long as plastics bags under 50 microns are sold in wholesale markets, the ban will not be effective. Hence, the authorities will have to clamp down on the manufacture and sale of such items.