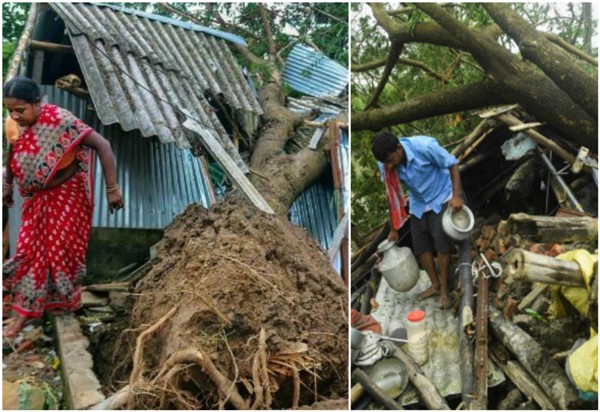 What is coming to light in the Cyclone Amphan relief disbursement in West Bengal, though nothing new for politicians, shows that when it comes to looting the funds meant for the people, all parties and their workers are the same.  It has been found that the list of beneficiaries includes a lot of fake names and it is alleged that local body representatives of TMC, BJP and CPM are all involved in sending such names.

It has been reported that the scam is being carried out in two ways. In the first method, local leaders are filling the list with the names of their relatives and party cadre, leaving out those who are actually affected by the cyclone. In some cases, the phone numbers against most names on the list have been found to be that of the local TMC leader. In some lists, the names of wives and other family members of the leader have also been found. In the second method, "cut money", ranging from 20 to 40 percent, is being demanded from actual beneficiaries for getting them the relief amount.

The majority of misappropriation is being done local level Trinamool Congress leaders. It has been brought to the notice of the party and chief minister Mamata Banerjee is livid. She has asked the party to take strict action against the offenders and get the money returned. Banerjee has also warned party leaders of stern action if they were found indulging in corruption. She was forced to take this step after protests were held across the Cyclone Amphan affected belt in the state. The chief minister has also formed an all-party committee to oversee relief operations but both the BJP and the CPM have called it "eyewash".

Coming close on the heels of the food distribution scam through the PDS during the lockdown, this scam has taken the TMC stock to a new low in south Bengal. There have been protests in areas where TNC had a strong presence and no one could think of going against the party even 6 months back. This has shaken the party. Although the party has taken action against several local leaders and in some cases the "cut money" has also been returned, the damage has been done. With state elections just a few months away, this is a huge setback for the TMC.