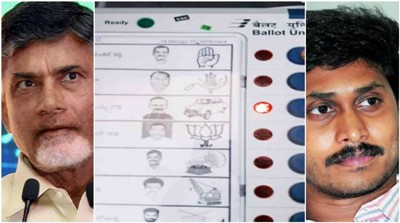 Who Is Defeating Chandrababu Naidu - Jagan Reddy Or EVMs?

Who Is Defeating Chandrababu Naidu - Jagan Reddy Or EVMs?

Editor-in-Chief of indiacommentary.com. Current Affairs analyst and political commentator. Writes for a number of publications. View all posts by this Author
The opposition had filed a case in the Supreme Court for having 50% Voter Verified Paper Audit Trail (VVPAT) for the Electronic Voting Machines (EVMs) but considering the huge infrastructure and the manpower required, the court had dismissed the petitions and asked the Election Commission (EC) to have VVPAT for at least 5 booths in each segment instead of the one it was planning.

That was a good decision considering the fact that it was already election time and any undue pressure on the EC would have thrown the election schedule haywire. The opposition alleges that the EVMs are being hacked by the ruling party. This is one charge that is hard to believe. If that was the case, no ruling party would have ever lost an election.

For the sake of convenience, let us assume that till the 2014 general elections, all political parties were spotless and did not indulge in any wrongdoing as far as tampering with EVMs is concerned. It was only after the dictatorial Modi-Shah duo assumed charge of India that they started playing around with the EVMs. They employed technical experts and hackers to steal all opposition votes and transfer them to the BJP or its allies. All buttons in the EVMs, other than those of the BJP and its allies, were so programmed as to transfer a fixed percentage of the votes to the NDA. Hence, there was no chance of the NDA candidates to lose. Modi-Shah had devised this method to commit a fraud on democracy and perpetuate their rule. No one in the Election Commission or the huge contingent that conducts the elections was patriotic enough to be a whistleblower and report this.

But if this was true, how is it that the BJP keeps losing elections? How did it lose in Delhi, Punjab, Goa, Karnataka, Rajasthan, Madhya Pradesh, Chhattisgarh and the prestigious bye-elections in UP? Has the opposition got any answer for this? It is easy to doctor an EVM and show that whichever button is pressed, all votes go to a particular party. But if the ruling party was doing this, it would have never lost an election.

Chandrababu Naidu, who is spearheading the opposition charge now, is doing so out of frustration. He has been out-maneuvered and out-campaigned by Jagan Reddy and there is no chance of his retaining power. Instead of introspecting and finding out the mistakes he committed that took him away from the people, he has tried to find an easy excuse for his impending defeat. In every such case, the EVMs and the Election Commission become the best whipping boys. Does Naidu seriously think that the EVMs in Andhra Pradesh are doctored to bring a victory to Jagan Reddy? Why will the BJP do this?

Even if the EVMs are as bad as the opposition says they are, junking technology and going back to paper ballots is no solution. India is the pioneer in designing software. Most global technical giants source their requirement from us. The opposition should suggest ways to improve the EVMs and make them foolproof if they find any problems. India has the technical expertise to work on their suggestions. But going back to paper ballots will take India back in time. The opposition should desist from making such demands.