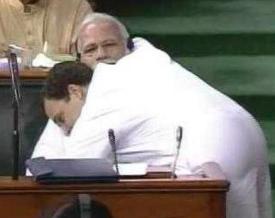 Who Told Rahul This Is A Hug?

Who Told Rahul This Is A Hug?

By our team of in-house writers. View all posts by this Author
People are talking about how the forced hug in Parliament has given Rahul Gandhi an exaggerated and false sense of self-importance and arrogance. He has now started saying that BJP minister take a few steps backwards on seeing him, lest he hug them.

People say that Rahul was just trying to show that despite people (read the BJP social media army) calling him Pappu, he was not angry and he could hug the PM to show that. But people say that he should have done it when the PM was in a better position to accept his so-called hug.

While gale milna or hugging is normal worldwide, people say that treachery is also involved in it (remember Shivaji and Afzal Khan). People say that there is nothing wrong in giving a jaadu ki jhappi (made extra famous by Munnabhai) to ones opponents. But people also say that what Rahul did was not a jhappi at all.

People also say that the BJP should call Rahuls bluff and instruct its minister to be proactive and start hugging Rahul the moment they spot him. It is most likely to stop him in his tracks and not let him win the propaganda battle. People say that then it will be clear who takes backward steps.